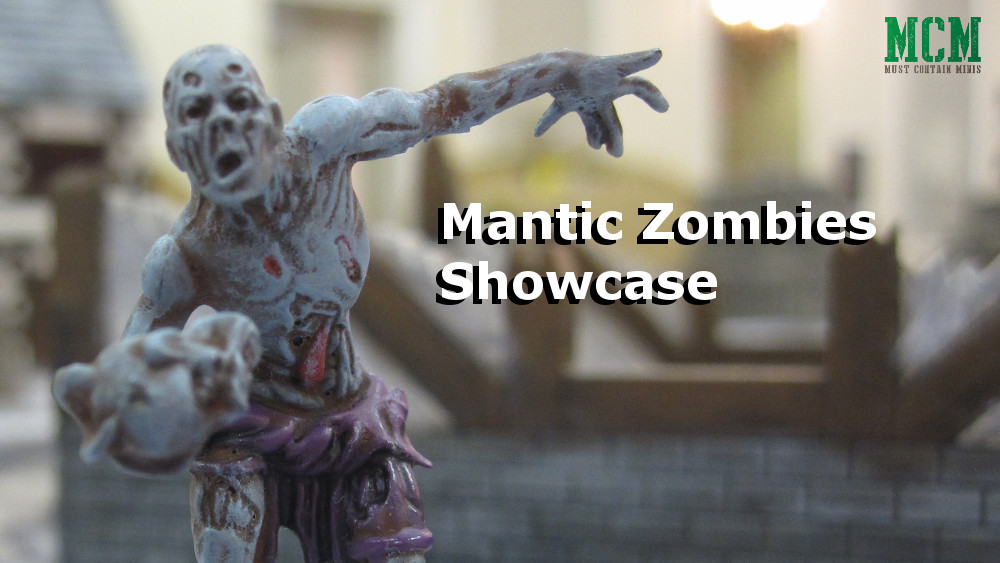 This quick post takes a look at Miniature Zombies by Mantic Games. I bought these miniatures through North Star Military Figures. They have a kit called Undead Encounters (product code FGV300) that features a good number of Undead Mantic Miniatures. These Mantic Zombies were among those minis. For those wondering, this set comes with 10 Skeletons, 4 Ghouls and 3 Zombies, all by Mantic Games. That is one of the things that I love about Osprey Games. They encourage you to use whatever miniatures you have, and they actually encourage you to buy miniatures from different companies.

If you are unfamiliar with Mantic Games, they create affordably priced 28mm miniatures. I’ve owned a lot of their figures as I collected both Dwarfs and Undead armies when they first released them with Kings of War (First Edition). The company is now getting ready for the third edition. Every so often when I sell miniatures, I find myself wishing I didn’t sell them. I found myself thinking this way when I learned of Frostgrave.

As a Necromancer Party Player, Undead Creatures are extremely useful. You can run with a Zombie in your Warband by using the Raise Zombie. This spell can be cast “out-of-game” to start with a Zombie in your group right off the top of the game. You can also cast the spell “in-game” and raise a zombie right on the battlefield. This can be done as long as there is no Zombie from this spell currently in play by you. This in effect gives you a dispensable soldier that you can keep re-summoning as required. The Zombie dies, no problem. Raise another one.

If you encounter Zombies in the wild (either singularly or in groups), your Necromancer also has a chance to control one by casting the Control Undead Spell. My preferred way to acquire Zombies is through the Raise Zombie spell.

Stats wise, you are not looking at much with a Zombie. They move an incredibly slow 4″ per turn versus a normal soldier’s move of 6″. They have good armour rating of 12 and 6 hit points. That is respectable. As for their fight skill, it is slow with a straight up +0 (that’s right, zero). That said, I have rolled a natural 20 and even killed a Wizard with a Zombie before. They can get lucky.

Overall, not a bad option considering that the Zombie comes in and above the normal party constraint numbers for a Warband. Now, let’s look at the miniatures!

All of the miniatures below are made by Mantic Games and painted and photographed by me. I aim for a tabletop quality that is good from an arm’s length, but these minis turned out pretty good. As I was shooting these at Ragnarok, I managed to get just two of the three miniatures. Regardless, they are nice minis and I hope that you like the showcase below.

And below is the second miniature. Got to say that I like this one carrying around the decapitated head of another miniature.

Overall, I am very pleased with how well these miniatures turned out. They were among my first Frostgrave purchases and I found myself really wishing that I kept my Kings of War armies when I discovered Frostgrave. What do you think of these models? Have you built them yet?