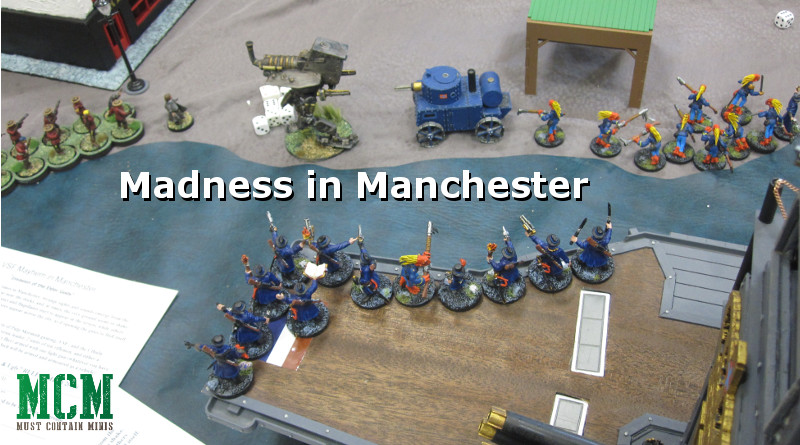 In this post, I discuss a participation game at Hotlead 2019. Specifically, I am looking at Madness in Manchester – Invasion of the Elder Gods by Dave Winters and Dan Hutter. The two guys hosted this ginormous game with probably around 20 people around the table. The theme, Victorian Sci-Fi (or Steam Punk) with a Cthulhu twist. They used One Brain Cell rules to run the game.

Every player brought to the table two ten man rifle squads with a vehicle. One player brought part of his Konflikt ’47 army. I was lucky enough to borrow an army. My friend Bill brought this set of armed Victorian Women along side a set of Canadian Mounties and a Steam Walker. He lead his group with Sherlock Holmes.

His investigators strived to protect the portals to the Elder World. Meanwhile, my crew’s objective was to destroy the portals, which immediately made us enemies.

Unfortunately, our deployment areas happened to be side by side.

Slowly Bill whittled down my force. I failed to cause many loses to his warband. The men on the deck stayed stationary and kept firing while the yellow haired parrot men raced to the Cthulhu gate on the table.

Being that this game held 20 players, there were others on my side. One group came and helped engage Bill.

It turns out that one force had the same objective as me while the other wanted to be consumed (killed) by Cthulhu to help the Elder God. Both allies had interests in keeping the gates open.

After a round or two with three on one, a small Elder God appears. One of my two allies immediately starts tossing their forces at the monster as sacrifices. The other continues his assault on Bill, but my forces keep taking loses.

Fortunately for Bill, a fresh unit with the same objective as his came around a building corner. He finished what was left of my forces allowing Bill to focus on his objectives better.

Enough grunts feed themselves to the Elder Gods and a full sized Cthulhu makes it to the table. Check out the size of this model!!! That is a 28mm miniature at the top of that building.

For those wondering, that model of Cthulhu is an old HorrorClix Model.

At this point, I had left the table as I was eliminated, but I saw the video of this model coming out and everyone around the table was absolutely thrilled and having a blast.

Before wrapping up, I want to post a few more pictures that I took of this game at Hotlead 2019.

Hopefully you enjoyed my first post from Hotlead 2019. I had a ton of fun at this event and it remains my favourite convention to attend. Special thanks goes to Dave Winters and Dan Hutter for running this table and to the organizers of Hotlead.