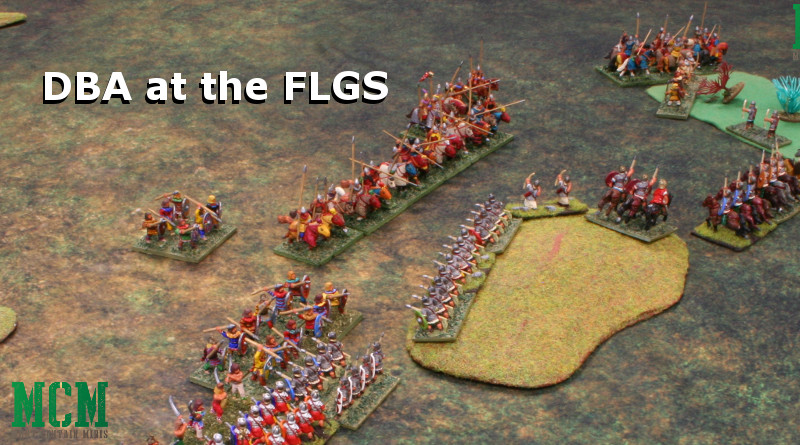 With everything going on in my life lately, it has been a long time since I played a miniatures game or painted something. This week, that finally changed!!! I painted a piece of terrain, built a HobbyZone Hobby Station, and even went to one of the Friendly Local Gaming Stores (FLGSs) to get in a game of DBA. This time, I went to Phoenix Games (in Kitchener, Ontario, Canada) and hooked up with their Historicals Club. This group meets Sunday mornings and play various historical games. One of their favourites is De Bellis Antiquitatis (DBA).

Today marks about the fifth time that I played DBA. I have Battle Report coming for that game, but in this post I am talking a bit about the club and will show pictures I took of one of the other DBA games. These pictures represent a single moment frozen in time. I could not stay to see how the battle unfolded. That said, these are nice pictures and I wanted to share them on Must Contain Minis. Hopefully you enjoy this quick post.

The Historical Club there is a discovery I made through a Flames of War friend. The group meets once a week. On that day, members bring their favourite historical games (and armies) or play DBA with one of the club’s armies. There is no “membership fee,” but everyone that plays a game chips in a bit to cover the costs of using the space. That fee, however, is not very much.

Today, I played DBA, took pictures of Cruel Seas and hung out with some great people. Now, let’s take a look at one of the three DBA battles ragging on while I visited Phoenix Games.

Below are some pictures of one of the three DBA games going on today at the store. I took them just as the lines met and the battle was about to begin.

This is a moment frozen in time with a look across the battlefield. Unfortunately I could not stay to see how the game played. If you know who won or have some highlights, please let us know in the comments section below.

As stated earlier, I don’t know who won but wanted to share pictures of DBA being played on a beautiful gaming table. For those wondering, they are playing on a Cigar Box Battle Mat.

Hopefully you enjoyed this quick post about DBA in my local area. If you are a fan of De Bellis Antiquitatis, I will be writing a Battle Report of the game I played today. Be sure to check back for that in the weeks to come. That story is going to be something neat. In that battle I played as the Hindu army taking on Central Asia Turks in India. Yes, I took War Elephants in my army list!  🙂

Finally, if you happened to be at Phoenix Games and know who won, please let us know in the comments below.

On The Paint Table – Rogue Stars