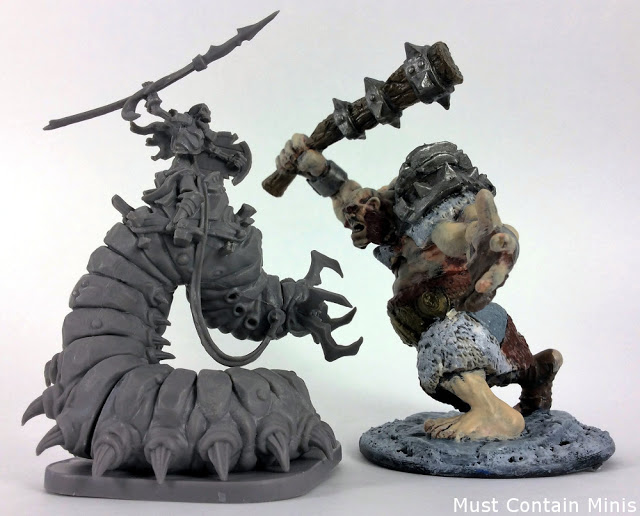 A few weeks ago, Asmodee sent Must Contain Minis a copy of Runewars the Miniatures Game by Fantasy Flight Games. This is a game that I have been excited about for a while so I was really pleased when there was a surprise copy waiting for me when I got home from work. Since there are already a lot of unboxing videos of it on the Internet, I wanted to do something different. That something different is a scale comparison to other miniatures companies.

This post focuses solely on the Undead (Waiqar) miniatures in the base game. These miniatures scale nicely to other 28mm manufacturers and one large undead miniature comes in the box.

The biggest undead model in the box is the Carrion Lancer. He comes in four or five pieces and assembles fairly well. There are some mold lines on the model, but overall a really nice figure.

Below is a scale comparison between the rank-and-file foot soldiers and the Carrion Lancer. You will see later that the Skeleton (Reanimate) fits in perfectly with 28mm miniatures by other companies.

The models themselves look nice. There are some mold lines on them and they are made of a different plastic than other miniatures. Being that they are plastic, I assumed that Plastic Cement would work as glue. The Plastic Cement did not hold, so I had to switch to Superglue.

Now for a closer look at the miniatures in the box.

As I mentioned above, the plastic is different than the typical miniatures I work with. It is actually closer to a hard plastic board game miniature than to something made by GW. There are some mold lines on the minis but the models go together easy enough and look fairly nice. I was surprised that there were no one piece minis in the box. This means that people will have to construct their miniatures, just as they would for other miniatures games on the market.

Although this post is a scale comparison article, I wanted to mention that it would take extra work to proxy models from different manufacturers into Runewars. This extra work is because the movement trays have special pegs in them for the Runewars miniatures to press into. These pegs might get in the way if one decides to fill the tray with miniatures of another make.

That said, I see no issues using the models from Runewars for other games such as Dragon Rampant, Dungeons and Dragons (D&D) or Frostgrave. Although – I am sure that most people that buy Runewars will likely use the minis mostly for Runewars.  🙂

My next two articles about Runewars will look at the scale of the miniatures from the other faction included in the box and give my initial impressions of the game.