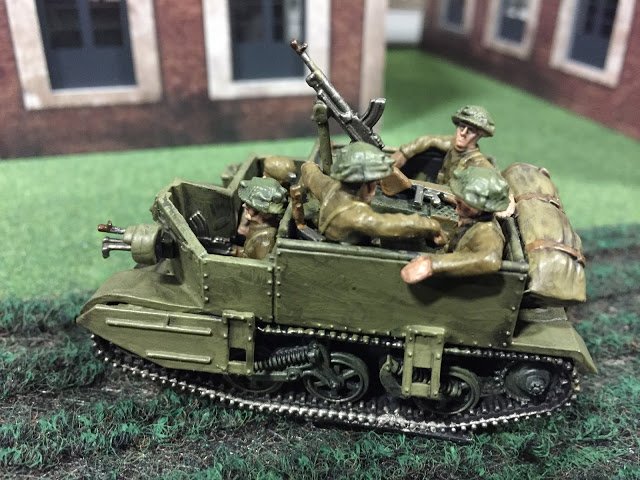 Forbes Hobbies is my favourite local place to game. The store has friendly staff and a huge gaming area. In tonight’s adventure, I met Jeremy and Dave for an Axis versus Allies game of Maximum Attrition in Bolt Action. The Axis had 1200 points of Germans and the Allies had an American Force of 600 points and a British Force of 600 points.

Below are the forces that we took…

Right off the bat Jeremy and I knew we were in for a tough battle. I had visions of my Carriers going up in smoke due to all of the AT assets on the table. Unfortunately for Dave, that is not how this game played out. Before getting into the report, I would like to showcase some of the awesome work that has gone into the tables at Forbes Hobbies in Cambridge, Ontario, Canada. The following table was built using all of their stuff. You may recognize some of the buildings from my earlier post reviewing miniature houses as Forbes bought heavily into the PlastCraft Games to field on their WW2 tables. The tables look great and are wonderful for play. 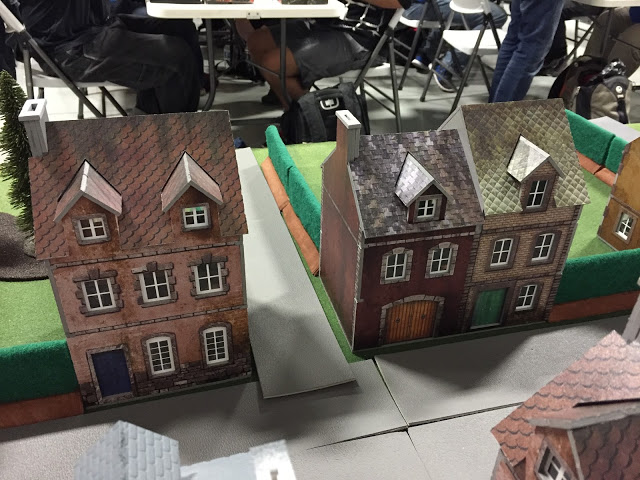 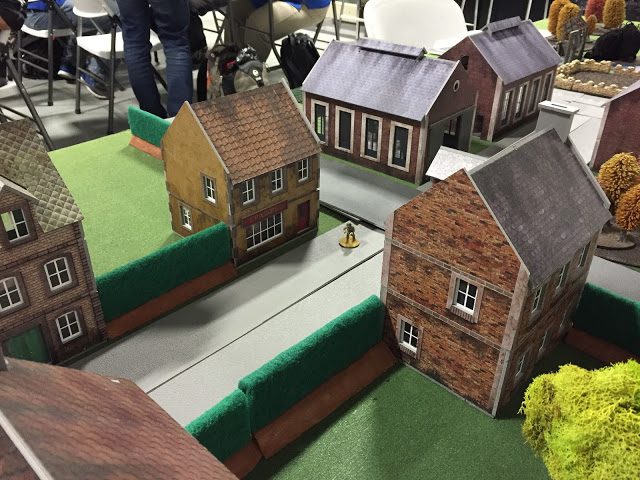 Jeremy was playing the game with one of the store’s armies. For this army, I believe that Jeremy built the models and Roy painted them. Check these guys out!!!

With that out of the way, lets move into the highlights of the game.  The mission we rolled was Maximum Attrition so the winner is basically decided by straight up kills. The German Sniper and British Forward Observer started on the table. Everyone else was off and set to either come in a first wave or as a reserve. The Germans started by running out a bunch of their infantry teams. This team was a little exposed and in the open, so I brought my carriers on to give them trouble.

Near the end of the turn, I called in my Artillery Barrage.

Turn two was pretty much about Maneuvering. The StuG missed the Sherman and the Sherman took out the Puma. I lost my first casualty of the game to sniper fire as one of my squads jumped out of a carrier and into a building. The sniper was on over-watch.

In turn three, things continued to get worse for the German army on the board. My infantry platoon that was dropped off in the building, a turn earlier, assaulted and killed Dave’s sniper team. To help rally his troops, Dave ran his commander over to a heavily pinned squad. This would prove a deadly mistake as his troops would mow down his commander in a hail of machine gun fire. The Sherman tank continued to dominate the battlefield on the right in a way not seen since the movie Fury.

Turn 4 and the Germans are in some serious trouble.
Turns 5 and 6 where pretty much just the Allies mopping up. Any Germans left were seriously pinned and ultimately eliminated.
Jeremy and I had a blast playing this game and Dave was a very good sport to play it to the end. Sometimes the dice just aren’t with you. The game ended with the Total Annihilation of the German forces with no full unit loses on the side of the Allies. Below are pictures of the casualties.
Aside from being a good sport, Dave is also a good painter. Below are some close up shots of his forces.
We had a blast playing this game. We play fairly casually at Forbes and all three of us were all able to really enjoy the story that unfolded on our tabletop through painted miniatures.
Suggested Stories and Ads...
Tags: Battle Report, Bolt Action, Forbes Hobbies

Frostgrave Nickstarter – An Inside Scoop!!!!

Top 5 Most Visited Posts of November 2018