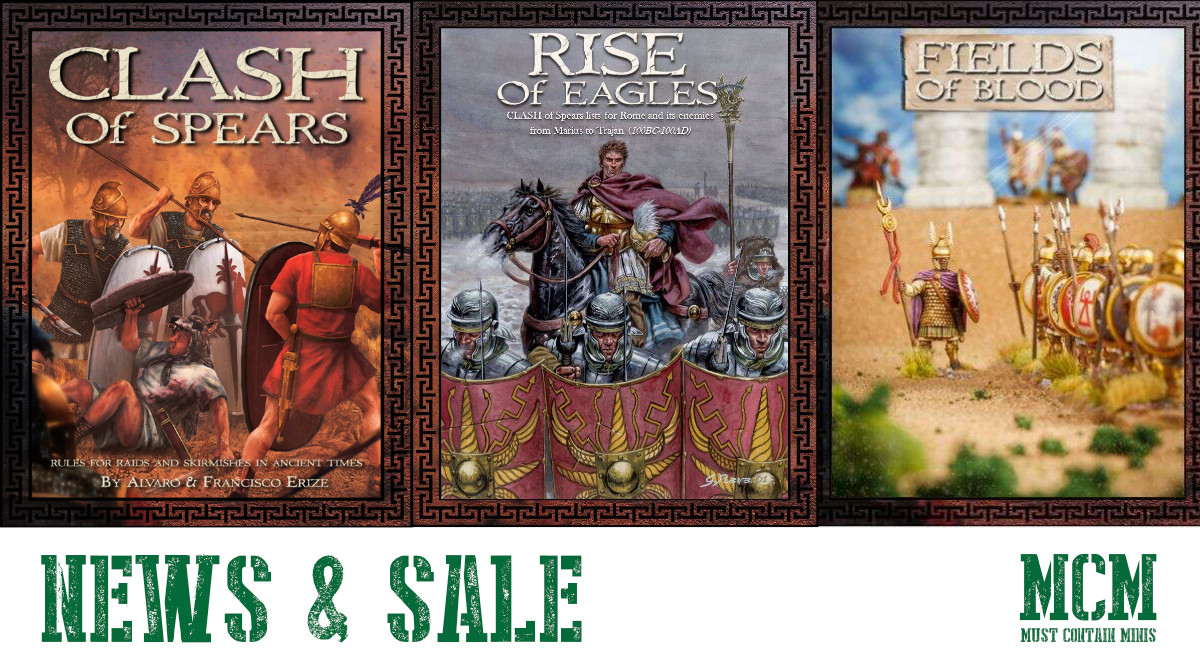 In this post, I talk a little bit about a game called Clash of Spears. This game is one that is long overdue for me to mention on this site.

One of the things that I have an issue with is that my attention is everywhere when it comes to games. I love everything out there and I really like learning about all of the options out there. I have the Clash of Spears book and found it to be well produced in my flip throughs of it.

Let me tell you a little bit about the game. Clash of Spears focuses on small skirmishes of 30+ miniatures per side in ancient times. I will list some of those armies in the entries about the newest expansion and the core rulebook.

For those who don’t know, Clash of Spears is by Fighting Hedgehog. I’ve taken notice of them lately because they released an expansion to their game. That expansion is called “Rise of Eagles.”

Clash of Spears entered back onto my radar because of a new release called Rise of Eagles. This book expands on the core rules with 13 new army lists.

This book is on sale now at the Wargame Vault and they plan to publish a physical copy of the book in December. You can check the price of that here [Affiliate Link].

Clash of Spears focuses on raids and skirmish battles during ancient times. This core rulebook contains all the rules and army lists that you need to play. Of course, you can expand on this, but this is your start to the game.

The book itself is beautiful. Check out this flip-through by the author on YouTube. If the embedded video below does not work, you can reach it with this link here.

Within the book are the core rules for the system as well as lists for different nations engaged at war between the fourth and second century BC in the Western Mediterranean. This includes…

Right now, this book is on sale on the Wargame Vault (check price here – Affiliate Link). You can also go to Amazon and check the price there too for a physical copy [Affiliate Link]).

On top of the newest expansion, Clash of Spears already had one called Fields of Blood. Fields of Blood includes rules for fortifications, solo play, urban fighting and more.

This one is available on the Wargame Vault and you can check out the price for it here [Affiliate].

Hopefully you enjoyed this quick article about Clash of Spears. I’ve been seeing this game pop back up in my feeds again because of “Rise of Eagles.” When I checked the Wargame Vault and saw that the whole collection is currently available at a discount, I wanted to share those sales with you.

Aside from Amazon and the Wargame Vault, you can also buy these rules and more from Fighting Hedgehog. Right now, it looks like the two expansions are PDF rulesets, but we should be seeing a physical copy of the new rules in December.

You can also learn more about the game (and find some more game related resources) at the Clash of Spears page on The Wargame Spot.

Thanks again for joining me.