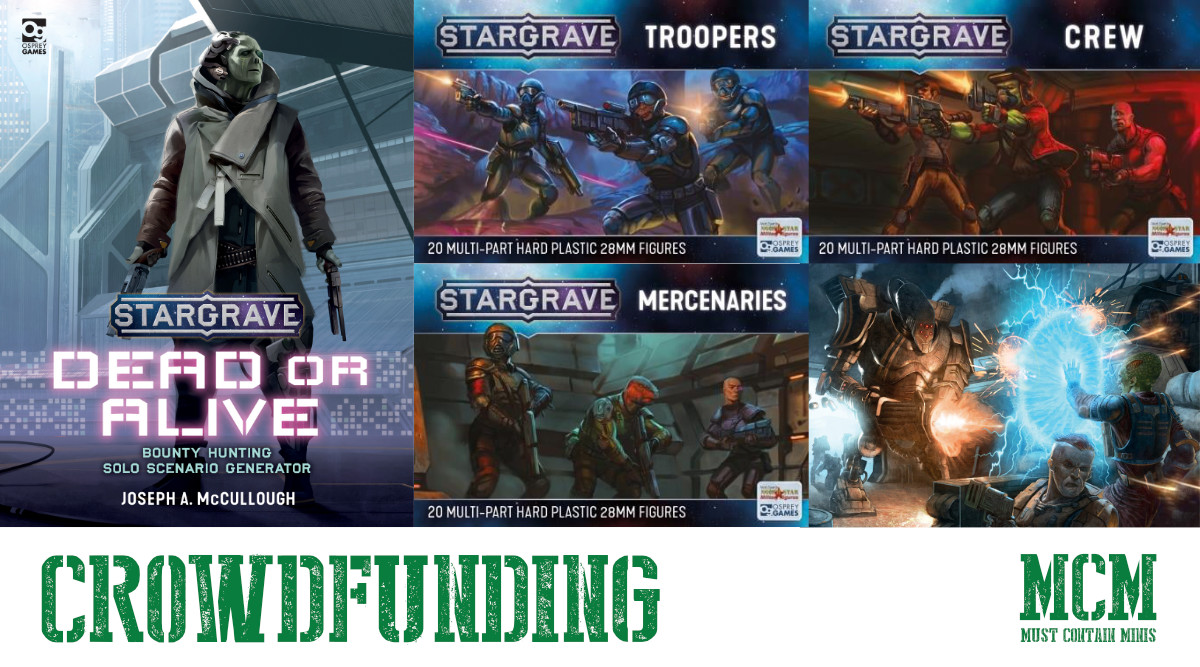 Have you been wondering lately about what we can expect from the Stargrave Nickstarter? Well the campaign is now live, but here is a taste along with some spoilers from the book. I also link to the campaign from this site.

For those who don’t know, Nickstarter is North Star Military Figures‘ version of a Kickstarter. Stargrave is a new miniatures game by Osprey Games who partnered with North Star Military Figures to bring us what could be considered “Frostgrave in Space.” In this post, I gathered images and information from around the internet to provide a preview of what we can expect. Now that the campaign is live, I will also link to it from here so you can find it quickly.

This campaign went live on Tuesday April 6, 2021 and it is going to be a big one! On the first day, they unlocked 4 stretch goals already!

We are going to see three boxes of plastic miniatures, the rules themselves and free solo play rules too! Now, lets take a closer look at what I have found so far.

As a note, all of the images in this post come from either North Star Military Figures or Osprey Games.

I have a preview copy of Stargrave and I can tell you that if you are familiar with Frostgrave, you will be able to take to this game quickly. I already have a post about the Captain, but what I did not tell you is that your Captain actually starts on level 15. In Frostgrave, your Wizard starts at level 0. This means that you will be able to improve some stats of your Captain right off the bat.

Stargrave, like Frostgrave is also a game about capturing loot, and taking it off the table. There are 10 different scenarios. In each, you are trying to capture prizes and take it off the table for rewards and experience. Like Frostgrave, this is a simple game that will excel when you and your friends play it in a campaign system.

Looking through, there are tons of similarities between the two games. That said, they are different as well. I am looking forward to eventually taking it to the tabletop to see how it plays.

Between Frostgrave and Stargrave, the chance of triggering a random encounter when you pick up treasure is the same. That said, in certain scenarios in Stargrave, you may draw in the attention of some unwanted pirates and bounty hunters each turn. That should make for a more dynamic game with more neutral enemies for both sides to keep into consideration.

Oh… In the Creature List for Stargrave, there is one entry as a “Mindgripper.” That is essentially a “Facehugger” from Aliens. How cool is that!

Finally, this core rulebook is just the start. I have already found placeholders on the internet for two new expansions in the future! This is a new game that will see lots of support from its creators.

Given that many of us are locked up and hiding in our homes away from COVID-19, any game that publishes with solo rules is a big plus. Osprey Games will release at the same time as the core rules a free expansion. In this expansion, you roll up a random outlaw crew and go after their gang for a bounty. For more about that, check out the Osprey Games Blog.

Incredibly exciting news from Joseph A. McCullough today. Stargrave will be launching in April with a free solo supplement: Dead or Alive. Solitaire gamers rejoice! Find out more: https://bit.ly/2PH3Y46

Above is the Facebook Post that I first saw that alerted me to this free expansion coming out at the same time as the core rules of the game.

To make this Stargrave Nickstarter even more exciting, North Star Military Figures is releasing three boxes of plastic miniatures with the game. That is the most that I have ever seen them release at once in these crowdfunding campaigns. Normally, Nick (hence the name Nickstarter) from North Star adds in some bonus figures to anyone that joins his Nickstarter campaigns. I am still waiting to see what those “extras” will be.

For the time being, North Star Military Figures has released plenty of teasing images on their Facebook Page. Let’s take a look at some of them.

Nick also previewed the Sprue for the Trooper miniatures above. Let’s take a look at that Stargrave Trooper Plastic Frame.

Overall, these are some really nice looking images. I am now really looking forward to seeing the Stargrave Nickstarter campaign unfold before us.

There are a few different pledge levels that you can go in on. The basic level includes the rulebook, some extras and your choice of one of the three plastic miniatures boxed sets. There is also a level without the rulebook, but you get all of the miniatures and finally there is a level where you get basically everything.

As this is a crowdfunding campaign. There are some extra unlocked minis that you get free with your pledge. There may be more to come too. Below are a few pictures of the extra figures.

A Stargrave Flip Through!!!

If you want to know even more about the game and what is in the rulebook, be sure to check out my Stargrave Rule Book flip through too!

There you have it. This has been my look at the Stargrave Nickstarter currently running on North Star Military Figures. While I recommend that you buy these straight from North Star to get any of the price breaks or extras that are available, you can also check the price on Amazon (Affiliate Link).

If you are in America, Brigade Games is also running this same Nickstarter campaign, but from closer to home.

I anticipate that this is going to be a very exciting game and I can’t wait to also check out those solo rules that Osprey will be giving out for free!