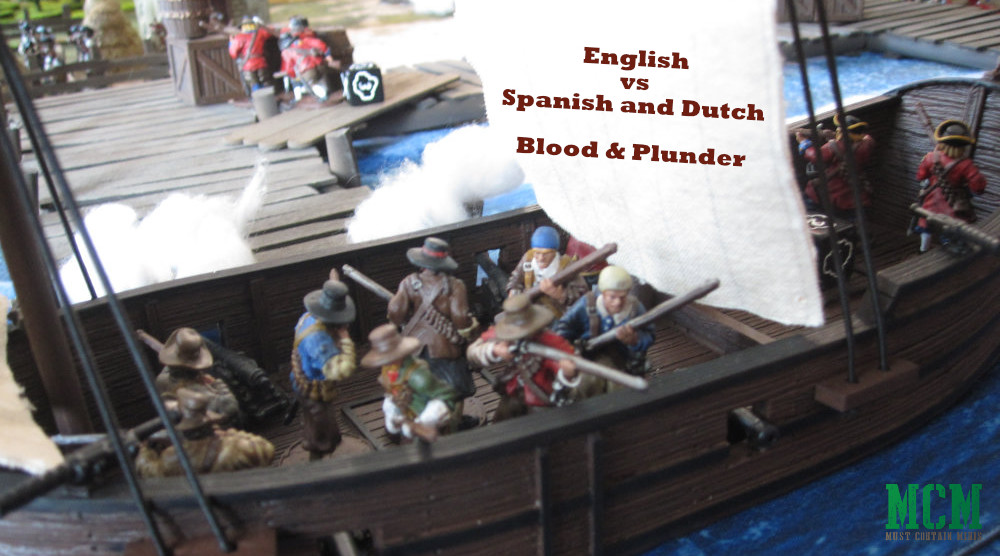 It has been some time since I last wrote about Blood and Plunder, but the game looks great and plays just as good. In this post, I describe a battle that I participated in between English Buccaneers and a Spanish Community. I happened to play the role of the Dutch Mercenaries stationed at the settlement to help guard the population. Another player played as the Spanish Militia while two others played as the English Buccaneers. I believe we clocked in at about 250 points a side. Now, on to this Blood and Plunder Battle Report.

For this game, a group of four Firelock Games enthusiast met to play a narrative game of Blood and Plunder. The English forces chose to take ships in their lists while the Spanish and Dutch took land-based lists. This meant that we would play out an amphibious scenario.

In the scenario that we agreed to play, the English would have to sail into a settlement and capture an objective. The invaders would know of three objectives. One would be a fake objective that would not count if they captured it. The defenders knew wish one was fake while the attackers did not. As such, a sound strategy for the attackers would be to go for two objectives so they don’t over extend themselves capturing a fake objective.

I placed an “X” over the fake objective and circles over the objectives in the picture below.

The Spanish and Dutch saw the ships coming, so they had a little time to place their troops close to the objectives while the remainder would have further to travel to get into battle.

The English Come to Town

With the stage set, let’s get into the action! To start, the British sail closer into the village. The sloop decides to v-line for closest dock while the bark takes shots with cannon fire into the settlement.

After a few rounds, the British finally make landfall. The Dutch and Spanish rush in to meet their invaders.

The Settlers Push Back

The British run out of time and the Dutch and Spanish win the game!

The group of us (Dalton, Roman, Will, Wes and I) had a lot of fun playing this game of Blood and Plunder. It is really a beautiful game that looks great on the table. I really like the game just for the aesthetics, but the rules are really good too.

The highlights from the game would be when the British Militia survived the charge from the Spanish Lanceros through sheer luck of awesome saving throws and when the Zeelieden group managed to pull of a double charge killing off two groups of British units in very short order.

Hopefully you enjoyed this battle report. If you want to read more Battle Reports or on Blood and Plunder and Firelock Games, we have dedicated sections of the website for them.