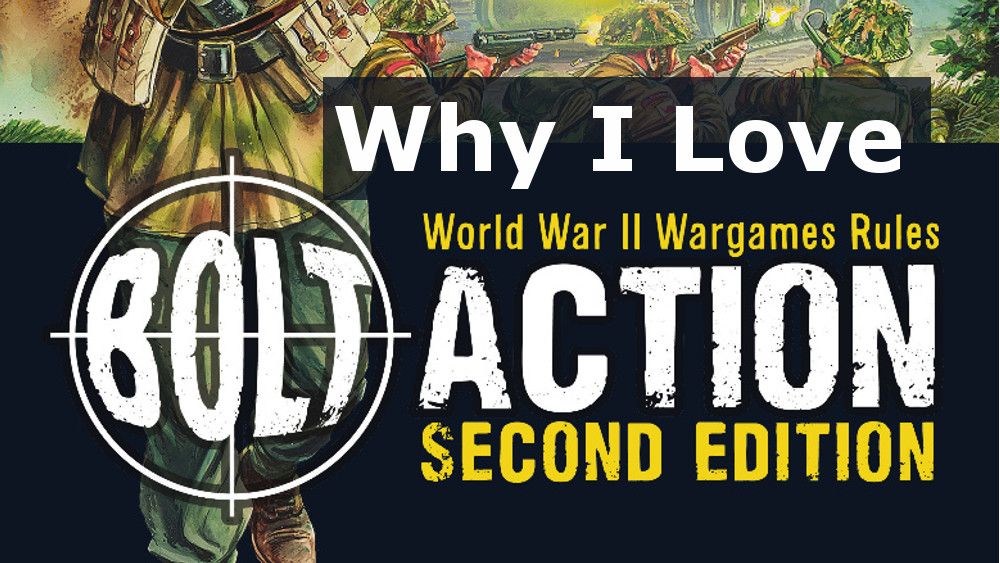 Today I published a Review of Bolt Action over on the Bell of Lost Souls. I decided to do a similar but different between the sites, but keep the content in both original. In this post, I quickly discuss why I love Bolt Action.

First off, I just Love the rules. They are simple yet fun!

If you have played other wargames, most of what is in Bolt Action will feel vary familiar. The rules are not difficult and there are many similarities in the game to other popular systems.

The Dice Draw Mechanic adds a lot of variety and variability to the game play. Unlike other games where you get to move all your forces at once, you anxiously draw dice in hopes that you get one of yours so you can pull off your awesome plan. Some times you may even sit there and hope your opponent gets the next die so you can see what they are doing first. Either way, I find that the dice draw mechanic adds a welcome element of luck not found in “I go, you go” games.

28mm World War Two miniatures are beautiful (in my opinion). Warlord Games has a large and great looking selection of Bolt Action Miniatures. There are also plenty of other companies that also make WW2 miniatures (in case you don’t like the cost or aesthetics of the Warlord ones). Personally, I like the Warlord Games ones and am constantly watching their site for their new releases. I wish I could own them all!!!

Before starting in 28mm WW2 Gaming, I played in the world of 15mm. I prefer to paint 15mm figures, but I much prefer building 28mm soldiers. The reason for this is that with 28mm you can take a lot more liberties in assembling your models. I prefer assembly over painting, so 28mm is a good fit for me.   🙂

I honestly like the Bolt Action Minis so much that two out of the three miniatures that I use for avatars for this site are actually from Warlord Games Bolt Action Line. Below are some quick pictures of those two minis.

One of the things that I really love about Bolt Action is the terrain is recognizable to our modern world (yet it is not in our current time). There are plenty of great companies out there that make fantastic terrain that you can use for this game. Cigar Box Battle Mats, PlastCraft Games and XOLK are some of my current favourites. Of course, Warlord also sells terrain too that you can use for the game for some really stellar tables.

As a note to the side, I recently heard that a huge Bolt Action tournament in the UK had some truly dismal terrain. If that is true, I feel sorry for those who attended. Please don’t think of that type of terrain as typical for Bolt Action.

Below is just a small sampling from some of our Bolt Action tables that we have used at Must Contain Minis.

I met a number of great people through wargaming and one of the things that keeps me coming back to Bolt Action is the local player base. Hopefully you can also find a great selection of people to play, but I have two great companies in my area that strongly support the game – Forbes Hobbies and Crucible Crush. Both companies run events (or provide space) where people can play Bolt Action. I do my best to attend when I can, but I also have a lot of demands on my time. I would love to get out more than I do.

Both Osprey Publishing and Warlord Games heavily support Bolt Action through new releases. Every month I find myself checking out there websites to see what is coming up.

Hopefully you enjoyed this quick post about why I love Bolt Action. If you want a full review of the core rules, be sure to check out my review on Bell of Lost Souls.