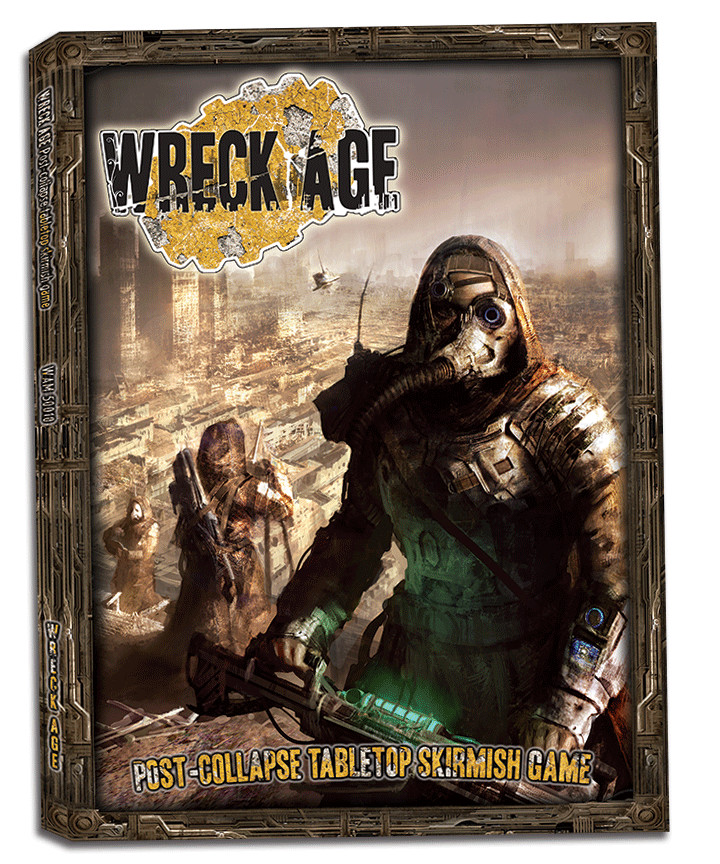 Today (February 5, 2018) marks the release date of the 2nd Edition of Wreck Age. Matt Sears from Hyacinth Games was kind enough to send Must Contain Minis an advanced PDF copy of the rules to take a look at for Review purposes. Thank you for sending these rules along. I really do like flipping through rule books of all sorts of Miniatures Games.

A little over a year ago, we took a look at the First Edition of the Wreck Age Rule Set.  The First Edition combined two games into one. There are rules for an RPG in that 244 page book as well as for a tabletop skirmish wargame. The game itself was fairly deep, and made a little more complex because the rules of both the RPG and wargame were in the same book. The Second Edition of Wreck Age cuts the page count down to 132 pages focusing on only the skirmish game.

If you are interested in our initial thoughts on the first edition, check out our earlier post about the game.

Right off the top, I found the layout and look of the second edition better than the first. The rules are explained fairly well and everything seems straight forward. One thing that is a little different is that your stat-line determines how many dice you roll rather than giving your characters numeric bonuses. The more dice you roll, the more likely you are to get the result that you want. If you roll two sixs, you get to add a +1 to your result. Roll three sixs and you get +2 and so on.

Below is a sample page describing tests and some dice mechanics to Wreck Age. 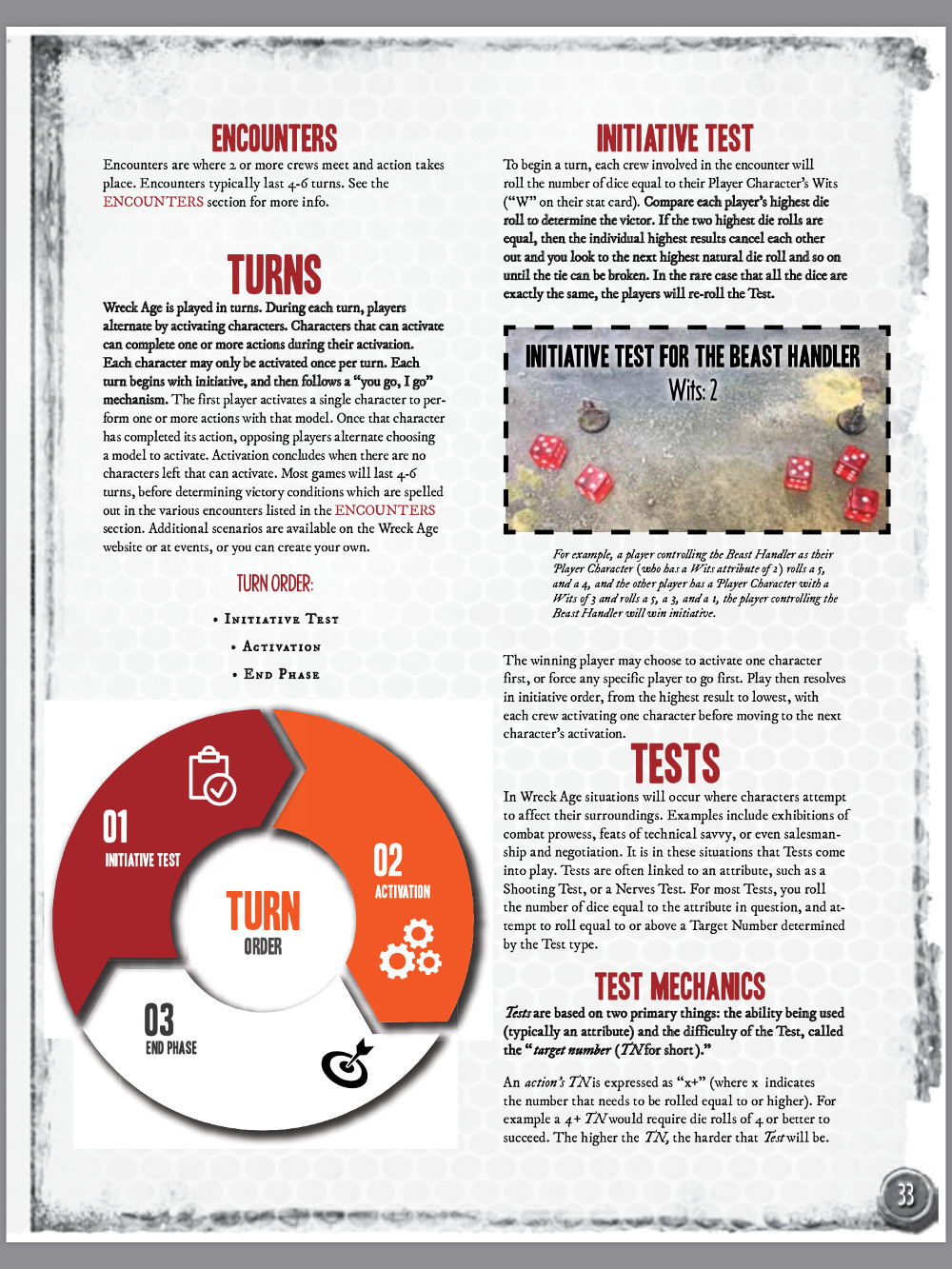 In this book, you will find 23 pages of rules for the core game along with 18 pages of “fluff,” 40 pages of rules for character and crew creation, 24 pages of campaign rules, and 7 pages of advanced rules. Your crew is basically your warband for this post-apocalyptic game.

The game itself is generally played on a 3′ by 3′ table but can be played on other sized tables too.

Personally, I like this rule book much better than the first edition. There is plenty of customization for your characters. If you want, you can also use pre-made architects in the book specific to the faction that you choose to play – I think that is the easiest way to go.

As you may know from my previous reviews, I love games where you can customize your characters and stats to represent the exact miniatures that you want to use on the tabletop.

While I love character customization, I also love campaign rules.

This game has campaign rules complex enough that it would be beneficial to use a “Narrator” or third person as a referee and storyteller for the game. I like that. It might not be everyone’s cup of tea, but the campaign rules here really gets my imagination going.

It is the Narrator that is supposed to set up and design the scenarios for the players to play. Without a Narrator, I am sure that they players can come to their own agreements on missions to play out on the table and how to customize the game to their crews. In the book, there are six ready made scenarios. 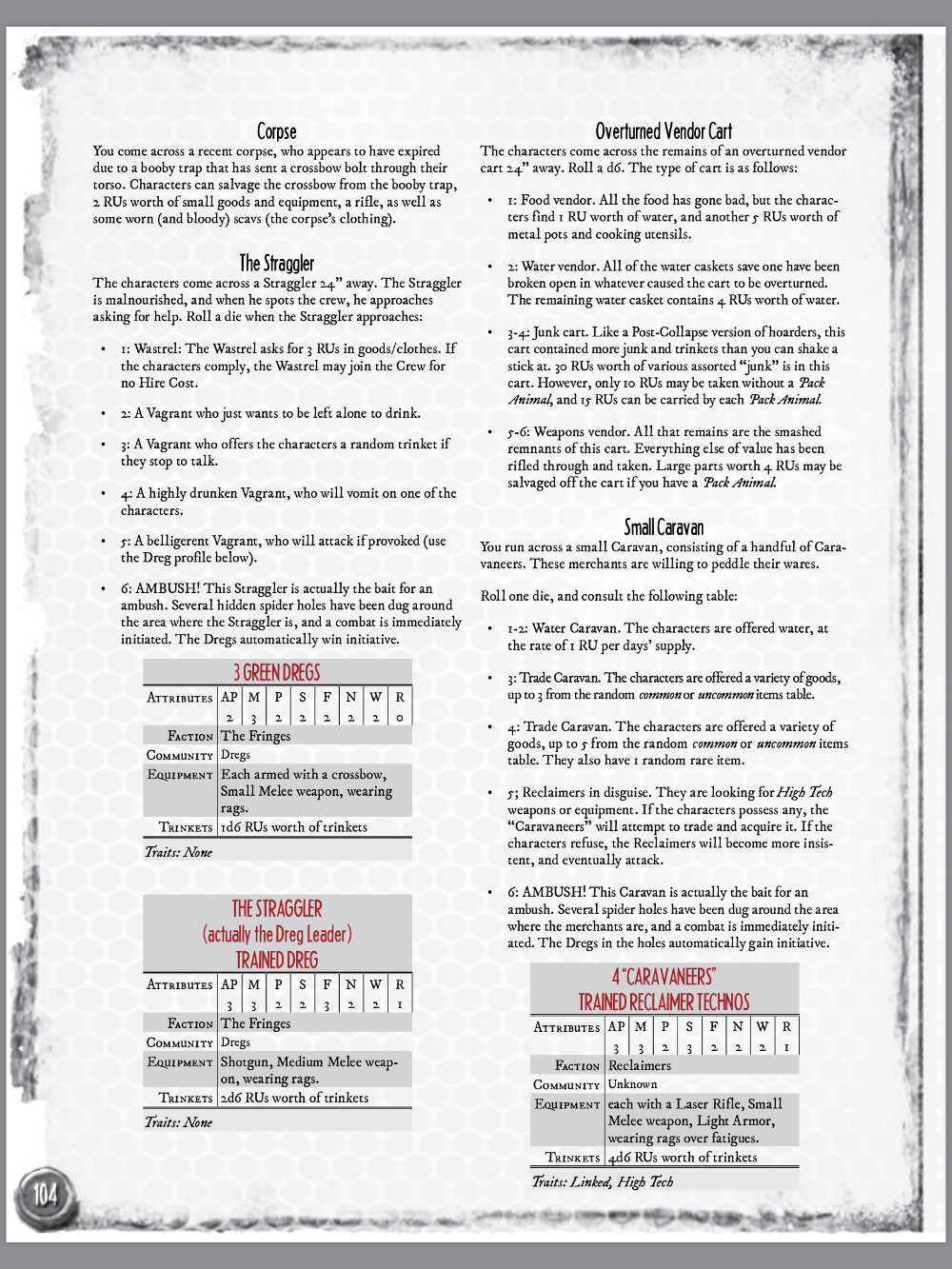 To make the game even more fun, players get to design and build their own “community” that supplies their crew. This “community” concept I love and what is presented in Wreckage is, in some ways, a beefed up version to other resource building and campaign style games where you get to build up your own base for in game benefits.

Below is a sample page from the “community” section of the book. 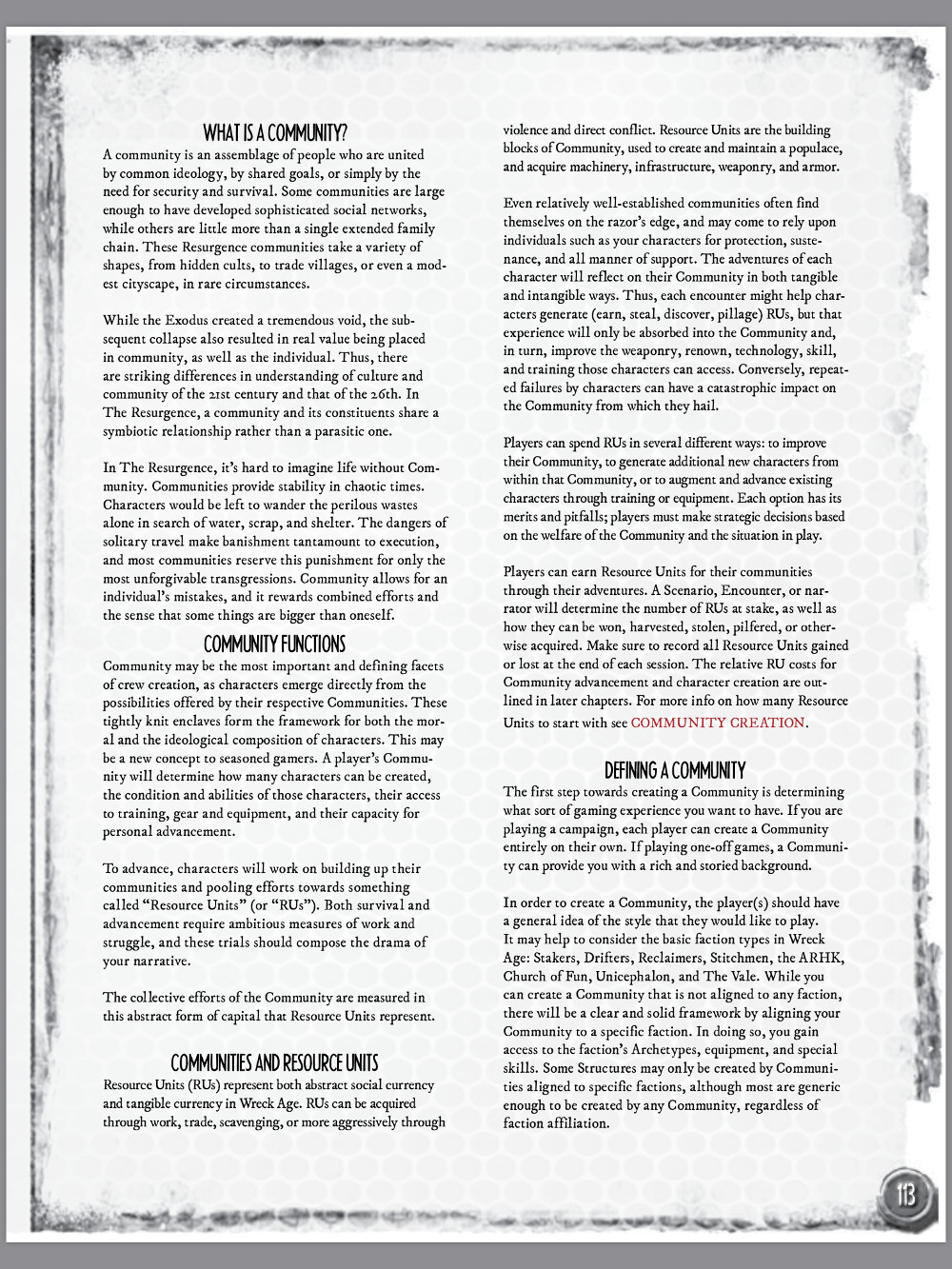 The community is a really cool concept and they even hint in the book on how they are going expand the “community” component of the game in future supplements. If they do expand this concept, I hope that Hyacinth Games will send me a copy of those rules so I can check them out.

Wreck Age looks like a simple enough game with a ton of depth built into it in ways of character creation and campaign rules. The “Fallout” style inspiration of the game is apparent to me while I flip through the rules. As it is, this is a decent looking core rule book, and I am really looking forward to seeing what future supplements bring to this game. Special thanks goes out again to Hyacinth Games for sending me this PDF file.

If you are interested in the rules, check out DriveThruRPG or head on over to wreck-age.net. Make sure that you buy the Second Edition of the rules to be up to date on all of the newest developments.