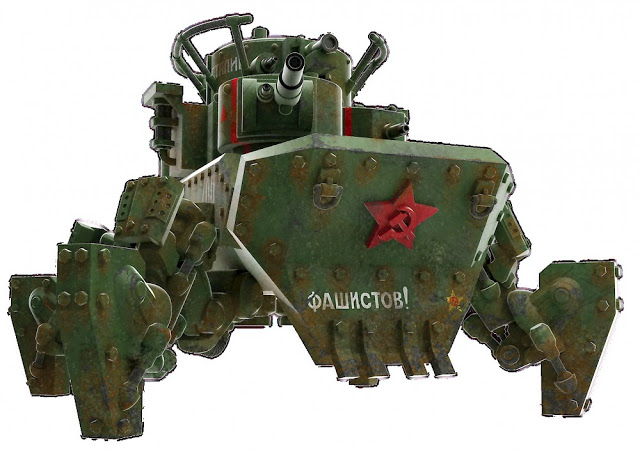 The final nation that we have to look at for Osprey’s Konflikt ’47 Lists is the Soviet Union. The soviets bring to the table many toys like the Germans, but their units tend to be bigger and more powerful than their German counterparts.

Right off the top, I would like show off the heavy hitter. This is the Mammoth Heavy Walker. It is like a T-35 but mounted on the chassis of a Thor walker. Just Awesome!!!

This unit is a Super Heavy Walker and houses one turret-mounted Light Howitzer, one front casement-mounted Heavy Howitzer, two turret-mounted Light Autocannons and one pintle-mounted HMG. This unit is just bristling with fire-power. Move it onto the table, park it and it will be a nightmare for any foe. To make it more durable, there is an option to give it the Tough rule by adding a dozer blade. Compare that to the German Thor Heavy Panzermech which sports one turret mounted Heavy Howitzer, one forward facing Autocannon and a pintle-mounted MMG. The Mammoth is like the Thor, but with even more powerful! If I ever get a Soviet Army, I think this guy would be an auto-include for me.

This next Mech unit is one that does not follow the theme of being bigger and better than its German counter part, but it is cheaper – allowing a Soviet Player to take more larger models in its place. That unit is the Cossack Light Walker. The artwork in the book for this guy looks interesting. Not necessarily an auto-include unit for me, but it is a nice cheap Agile Recce Walker. It is armed with a forward-mounted Light Autocannon and a co-axial MMG. It does come with the option to change out the Autocannon for a Light AT gun but then the model loses its Agile characteristic. The German Spinne Light Panzermech is similar to the Cossack but comes with a turret-mounted Light AT gun with a co-axial Light Autocannon. Its weapons have the Flak rule and it is also an open-topped Agile Recce Walker. There is an option to add a flamethrower to the Spinne, but then it loses the Flak and open-topped rules. Unless the flamethrower is taken, one advantage the Cossack has over the Spinne is that the Spinne is considered an open-topped vehicle (a rule my foes take advantage of by pinning vehicles with small arms fire).

The second coolest looking Soviet unit (in my opinion) has been getting a lot of attention on the internet of late. It is the Soviet Heavy Infantry Squad. These guys are cool and a unit is made up of 5 to 10 men. These guys are Resilient and Slow, but are all armed with an Assault Weapon and a Dual Weapon Pack. Up to 4 of them can replace their Assault Weapon with a second Dual Weapon Pack. These Dual Weapon Packs pack a huge punch! When firing, the player may select one of two modes. One is as an AT Rifle with +2 PEN and the other is as a SMG (3 shots and Assault). This makes the Russian’s variant of the Heavy Infantry the most powerful in close combat. Their weapons are very short ranged compared to the others, but having up to 10 +2 PEN shots coming at you or 3 to 6 SMG rounds per model spraying over your models, makes this is a very scary unit. Oh, and the entire group counts as Tank Hunters too. Meanwhile, the German Wehrmacht Heavy Infantry Squad is fully armed with Assault Rifles with options to bring two soldiers with LMGs and two others with Panzerfausts. Panzerfausts can be wicked, but having 10 rounds of +2 PEN coming in at your Resilient units versus two short ranged, one use weapons, enemies will think twice about getting close to these Russians.

Now let’s get into the genetically modified units…

The Soviets’ answer to Schreckwulfen (Werewolves) is the Ursus (Were-Bears). These units are bigger, stronger and tougher than their German counterparts. The Ursus are both Resilient and Tough, which gives them 6+ to be damaged by ranged attacks and a 5+ saving throw – giving the Ursus more staying power than the Schreckwulfen. Like the wolves, both the were-bears and werewolves invoke fear and have Tooth and Claw (3 attacks in close quarters combat). The Ursus are stronger than the wolves and inflict more damage to vehicles in melee combat. Unlike the wolves (who are fast), the Ursus move at the same speed as regular infantry.

Siberian Terror Squads can be thought of as Ghouls who are immune to cold and fire (meaning they take no pins or damage from flame throwers). These guys are armed with knives and may be upgraded to carry SMGs and Panzerfausts. They are Fast Fanatics. Their closest thematic counterpart in the German army would be the Totenkorps (Zombies). The Zombies of the German army are considered Tough Fanatics that Ignore Pins and have the Tough Rule. Unlike the Siberian Terror Squads, Totenkorps are slow.

The final Russian Infantry unit that I am looking at today is the Daughters of the Motherland. These DNA enhanced soldiers are all armed with Assault Rifles with options to take LMGs, Panzerfausts, anti-tank grenades and Body Armour. If Body Armour is taken, they become Tough. They also come with the Fast and Fanatical Rules. A unit of these soldiers is made up of 5 to 10 members. The closest thing in the German’s list is the Nachtjager Assault Squad. the Nachtjager are also DNA enhanced, but to a much more terrifying level. While the flying Nachtjager are Tough, Strong and fight with Tooth and Claw, they cost more points and do not have access to ranged weapons. The Nachtjager unit also caps out at 4 soldiers.

And now for the tanks…

In the interest of completeness, I also have to touch on the weird tank options that the Soviets can access. The Soviets have weapon technology based on ultra-low frwquency sound waves. The Zvukovoy Proyektor is extremely deadly to infantry and the crews of armoured vehicles. The shock-wave causes everything in its line of fire to take 1d3 pins. Any infantry or artillery units also suffer a variable number of hits with a pen bonus. Vehicles hit suffer ‘crew stunned’ in addition to the 1d3 pins. An interesting effect. The Germans use Gravity Pulse technology as their special tank weapon in Konflikt ’47. The Gravity Pulse acts as a counter to heavy armour and disallows the unit hit from running in the following turn. The German special weapon is good against tanks while the Soviet weapon is great against infantry. The Zvukovoy Proyektor can be mounted on a T-34 or a KV-1. Personally, I would go for a Walker in Konflikt ’47 before a Tank simply because the Walkers give the look and feel that I want in my Weird War games.

I hope that you enjoyed reading this article. I am really looking forward to December to see what Warlord packs into the Soviet and British Starter Boxes.

I think that the Soviets offer some interesting army possibilities for Konflikt ’47 and if I were to do my own build I would likely do a list including the Mammoth, Heavy Infantry and as much regular and untrained infantry as I can fit into the list. This would give me a couple of very powerful units in a hordes based army. How do you plan to build your soviet forces?