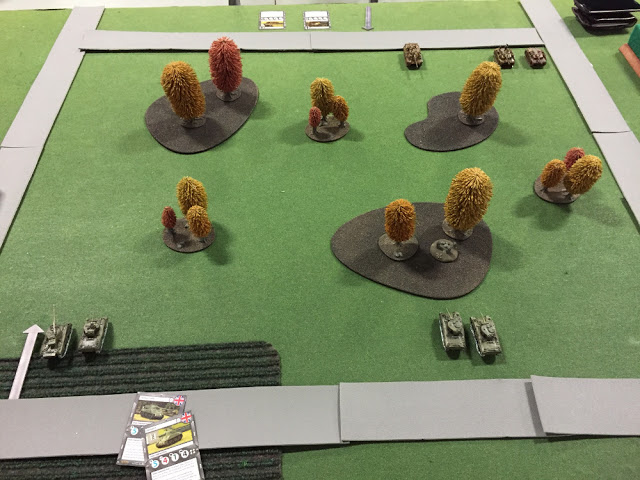 I finally got in a game of TANKS, which I wrote an unboxing article about earlier. I would like to start by thanking Forbes Hobbies in Cambridge, Ontario, Canada for providing me with the Terrain and Gaming Space for this article. The Tanks within are from my own collection and today’s opponent was Craig.

To give Craig a small advantage, I allowed him to choose whether to field the British or German force. The mission decided upon was “Panzer Ace.” Whomever eliminates all of the enemy tanks first or kills the most points worth of tanks by a pre-determined time limit wins (roughly 45 minutes for our first game).

Craig passed on choosing the force and allowed me to pick which squad to use. I took the British.

For deployment, the British set a pincer maneuver while the Germans focused their power to a single edge of the table.

At this time, the game reached the agreed upon time limit. The Allies lost two Sherman Vs while the Germans lost one StuG and a Jagdpanther – which gives the win to the British player.

This was the first time that either Craig or I played TANKS and we both had fun. It is a quick and simple game that has some strategy. I really liked that it is an affordable game that allowed two guys that had never played the rules before to get it on the tabletop and play a satisfactory and game in 45-minutes. It wouldn’t be a far stretch for people who know the rules to get in a game in a half-hour.

I was really hoping that this game would be an X-Wing killer, but it is not. While the games are similar in rules and scope, they are different enough to make it worth owning both. Where I think TANKS would shine is either as a filler game for guys into Flames of War or as a Gate Way game into Flames for anyone that likes making small models or World War 2.

I hope everyone enjoyed this battle report. Until next time, Happy Gaming!!!