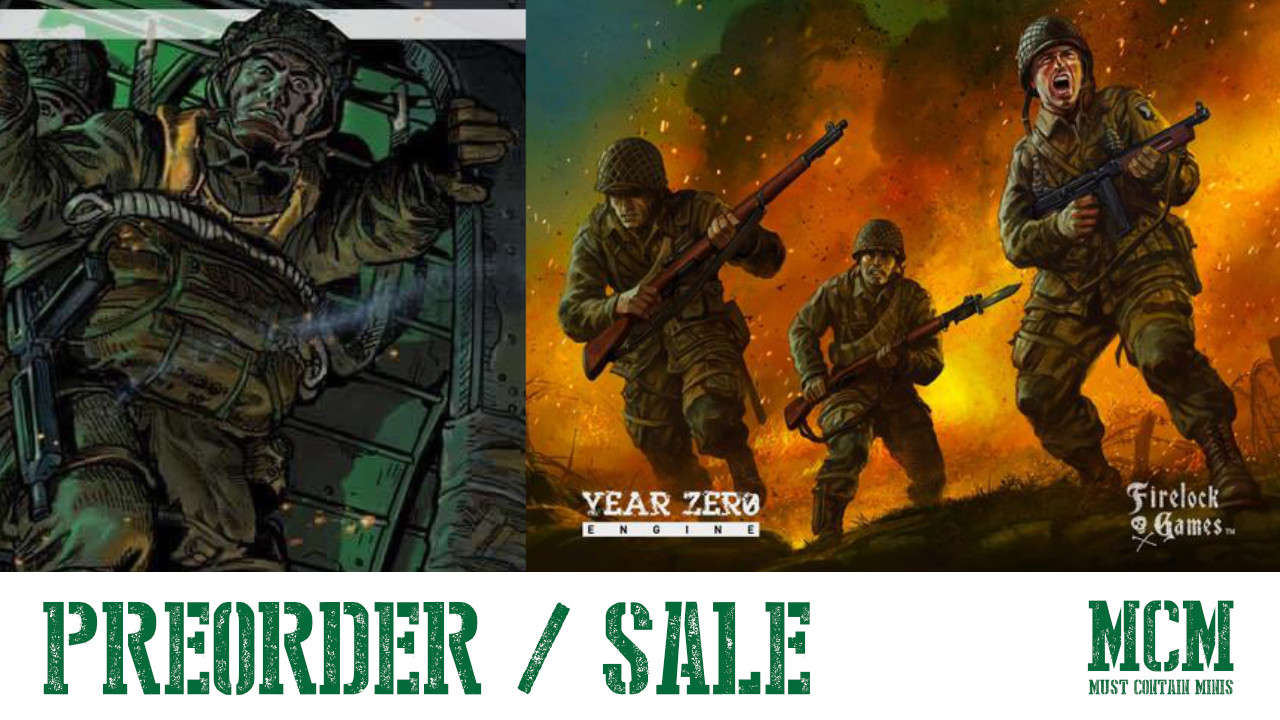 I’ve talked about War Stories on MCM before. It is a new WW2 Roleplaying Game by the folks at Firelock Games. Right now, they have this new gaming system up on pre-order and are currently offering 20% off. Nice. If you are into WW2 and RPGs, then this might be an offer that you want to get in on.

To find the deal, head over to their online store. To make it easier, here is the product category for War Stories. So, what’s being released?

The War Stories All In Bundle

In the bundle, you get the following…

Of course, you can also buy all of these items individually too. Let’s talk a bit about those two books.

This book gives you the rules you need to play the game. You can get this as part of the bundle mentioned above, or as a Hardcover book or a PDF on its own.

Below is how Firelock Games describes the book.

War Stories is a roleplaying game set during the Second World War. With it, you and your friends may play the roles of heroic soldiers parachuting into Normandy during Operation Overlord in June of 1944, or as a harried tank crew grinding their way through France in the breakout that followed. You may even explore history as an intrepid war correspondent or an underground resistance fighter. The campaign game will allow players to tell the tale of their stalwart band as they collectively liberate France and drive onward toward victory. Above all, players will create moments of valor and courage, ultimately weaving their personal tales into the fabric of history, from D-Day and beyond. These will be their War Stories.

The Campaign Rulebook: Rendezvous With Destiny

The Rendezvous with Destiny book gives your gaming group a campaign to play as Parachute Infantry leading up to Operation Overlord. Here is how Firelock Games describes the book.

In ’Rendezvous With Destiny’ your players take on the roles of paratroopers of the 506th Parachute Infantry Regiment (PIR) of the US 101st Airborne Division. They will jump into German-occupied France, and fight to secure the success of Operation OVERLORD, the Allied invasion of Normandy.

This campaign book contains all the information the GM needs to create intense and exciting stories, fighting and striving to win the battle for Normandy. This battle will pit them against the worst that the Germans can throw at them, and pit them one against the other in a struggle of honor, loyalty, and vengeance.

Today’s post is a quick one to inform you of a sale that I feel might interest some of my readers. Personally, I don’t currently play RPGs because I prefer miniatures games, but the artwork and details released of this system so far look very interesting.

If I find it interesting, I am sure some of you will as well. The fact that you can save some money on it if you buy now is a bonus that I wanted to share. Right now, that is a 20% discount.

Finally, if you haven’t looked into Firelock Games before, they are an American company with plenty of interesting games. My favourite category is their miniatures games were they have Blood & Plunder, Blood & Valor, Blood & Steel and Oak and Iron. There is a board game called Scurvy Dice and finally they are getting into RPG games. They have this upcoming WW2 RPG game, and I have heard mentions that we might be able to expect a Pirates RPG in the future.