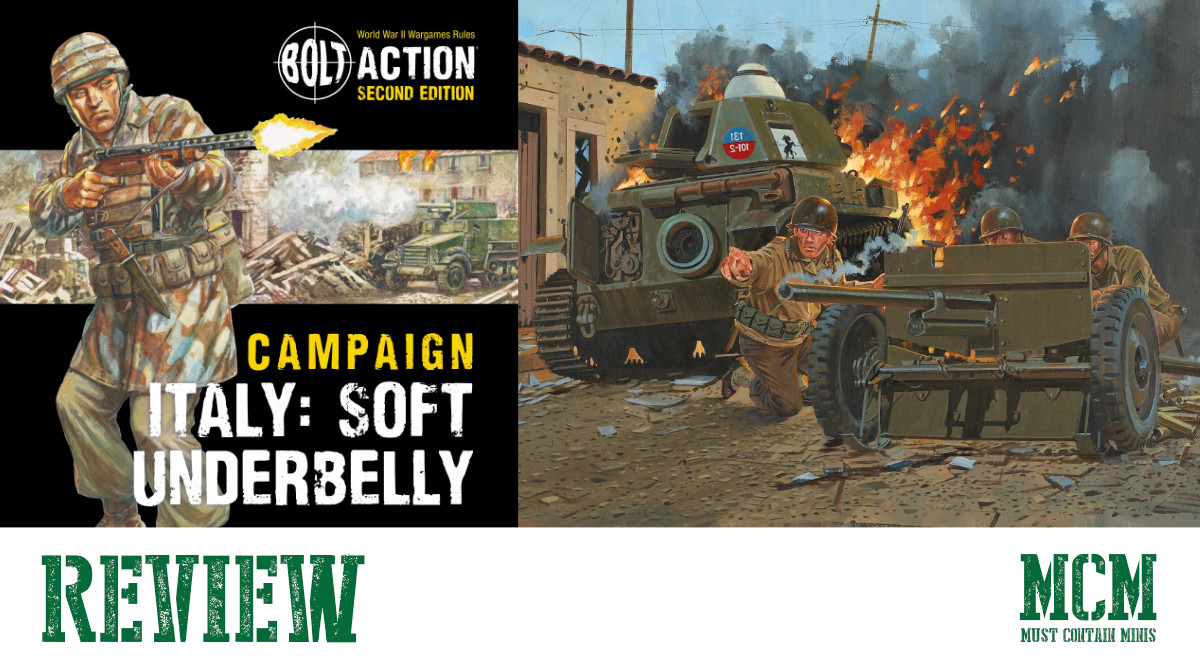 In this post, I discuss with you my thoughts on Bolt Action’s newest campaign book called “Italy: Soft Underbelly.” This brand new book is out now and covers the battles of the Sicilian and Italian campaigns of 1943.

I aim to inform you about the book’s contents and to give you a better idea of whether you want to invest money into this expansion. As a heads up, I have not played the scenarios in the book, but rather gave the book a quick read through instead.

Italy Soft Underbelly involves the British (Commonwealth), United States, German, and Italian Armies. If you want to play one of these armies, it is highly likely that you will also need the “Armies of” book for the nationality that you wish to play.

In the interest of full disclosure, Osprey Games sent me this book for review purposes.

Now, let’s get on with what is in the book.

A Very Quick Summary of the Campaign

To give context to the book, let me give you an extremely quick and high level explanation of the campaign. As a heads up, I oversimplified this explanation, but it does set the scene.

Britain wanted to invade Italy to soften up German defenses and to force Germany to relocate soldiers to cover a weakened position. To Churchill, Italy seemed like the right way to do this.

America wanted to focus on Operation Overlord and to hit Germany head on instead. America agreed to allow (and help in) the Italy invasion as long as the allies would still continue forward with Operation Overlord.

After some brief history, the book immediately moves into scenarios to play through.

Upon opening the book you will find a little bit of historical background information followed by a series of 13 scenarios to play through. Each scenario gives you the historical significance, what occurred and a suggested set up with special rules. Within this, you find the objective of the mission and which forces were involved. You play as these forces.

At the end of every scenario there is an aftermath section. This section lets you know how the history played out after the battle.

Here is a quick example of a scenario being set up in the book.

This section of the book covering history and scenarios takes up 66 pages and gives a sense of progression as you go through each battle.

New Units for the Italy Campaign

The book then dedicates about 39 pages to new units. Warlord and Osprey give us new units for all four of the nationalities in this book. I am not going to go through all of the new units, but I will mention a few of them.

The book then goes into a section talking about the heroes that you can take during the campaign followed by the unit selectors.

The scenarios tell you specifically which forces you may select from for each battle. Of course, you could also use these selectors for pick up games too if your opponent is willing.

The book dedicates just over 30 pages to theatre selectors. Each give you your typical force options. I placed a quick sample page below.

The book contains a number of lists that allow you to take multiple tanks or two artillery units. You can see in the Gruppo Mobili Carri Reinforced Platoon in the sample page above allows you to take up to five tanks or vehicles.

As some of the new units would suggest, there are lists for Fallshirmjager , Hermann Goring Division, Canadian First Division, and 82nd Airborne Platoons. Of course, there are many other options too, but I just wanted to list a few of them.

Next up, the book goes into an appendix of special rules and generic units before finishing.

Overall, it is an interesting book and there are a number of ways to get your hands on it.

Getting your hands on the Italy: Soft Underbelly Campaign Book

You can get your hands on the new Italy Soft Underbelly Campaign book for Bolt Action in a number of ways. First and foremost, I am going to mention the Osprey Games website as they are the ones who sent me the book for review. By buying from them, you buy direct from the publisher. Warlord Games is also an obvious choice to look at for buying this book.

You could also check out your favorite friendly local gaming store or online retailer.

I will mention some here because I have affiliate deals with Amazon, Wayland Games and DriveThruRPG. If you buy from them after using one of these links, a small portion of the sale price goes to Must Contain Minis as a commission.

You can use the links below to check the Price

Thank you for joining me in this quick Bolt Action Campaign Review for Bolt Action: Campaign: Italy: Soft Underbelly. It has been a while since I last wrote about Bolt Action.

If you want to check out my older posts about the game, I have a section dedicated to Bolt Action on Must Contain Minis. Please feel free to go through there to read some of my other game related posts.