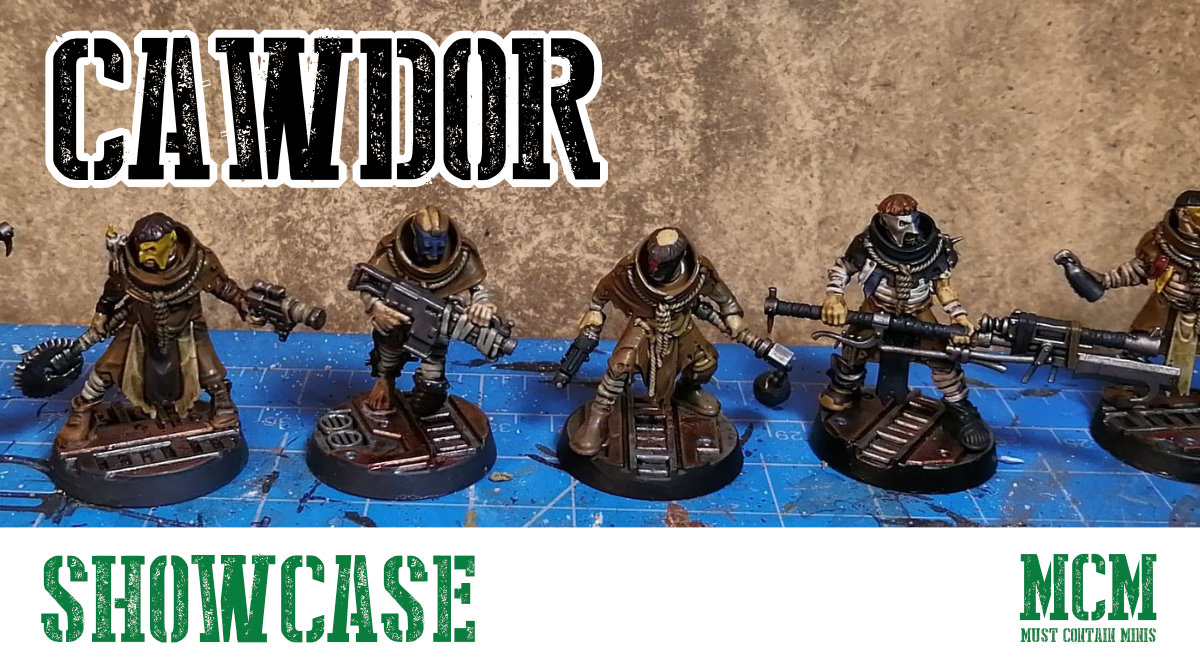 A while back, my friend Dave sent me a picture of some House Cawdor miniatures that he painted. I took that picture, edited it a little and figured I would share them with you.

These miniatures come from the game Necromunda by Games Workshop. These are the miniatures in the Cawdor Gang box set.

If you don’t know about Necromunda, it is a game where gangs in hive cities of Warhammer 40K fight for supremacy. The game brings a grittier feel than 40K. The models pack less advanced weapons than the soldiers of the bigger wargame. Necromunda also happens to be a skirmish level game.

The Cawdor Gang devote themselves to the Cult of the Redemption. Within their weapon sets, you can find flails, autoguns, polearms with mounted guns, and even hand flamers.

If you are interested in these minis, you can buy them from a number of places including Amazon.

Thanks goes out again to Dave Lamers for sending along these pictures. For those wondering, he does do commission painting and specializes in speed painting for finishing large volumes of minis quickly. For more of his work (and his contact details), check out his painter’s page on Must Contain Minis.

I realize that the House Cawdor Gang boxed set contains more minis than this, so maybe we will see more of these pictures as they come.

So far, this is some really great work by Dave. Thanks for sharing!

Today’s post is just a quick write up to show off Dave Lamers’ Cawdor Gang. These minis are really cool. Even though they are new sculpts, they take me back in time.

Many years ago (in the late 90s), I used to play Necromunda. I didn’t own my own gang at the time, but instead borrowed a friend’s extra Orlock Gang. One of the other players always played Cawdor. I remember how much his gang relied upon flamers. Terrifying.

Thanks again for joining me.