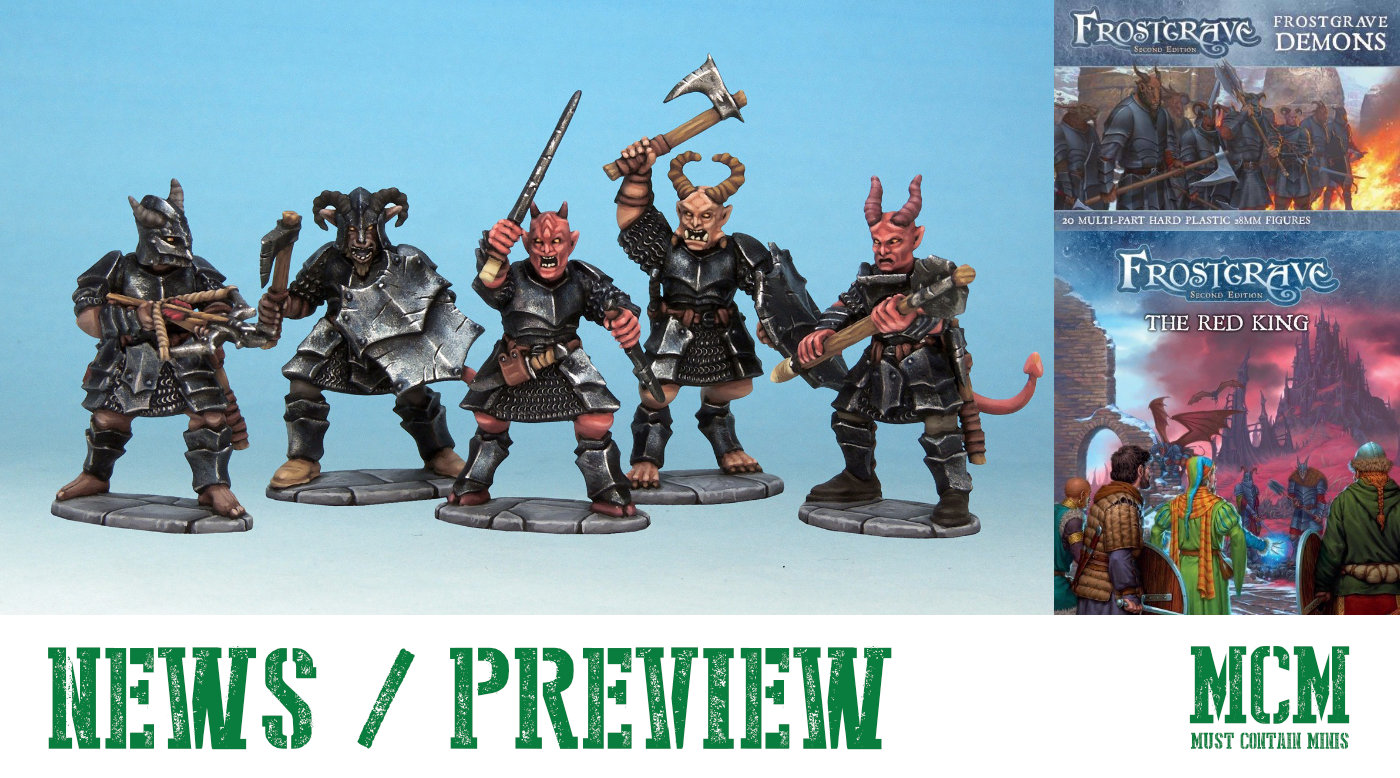 I found pictures of the new plastic Frostgrave Demons and their sprues, and just had to share them! I also found some images of the other figures available with the new Frostgrave book, The Red King. The books and miniatures release this December 10th (2020), so they are about to hit the market really soon!

Seeing the sprue of a miniature set really helps you know what to expect from the product. Below we have exactly that. Let’s look at the front and back sides to the plastic frames on which these minis come.

The amount of armour on these miniatures is incredible. They are so heavily armoured that they could easily rival your Frostgrave Knights. Doing a quick count, you should get four of these frames plus bases in each box set of miniatures.

Just looking at these frames and I am already imagining a variety of ways in which you could build these minis. They look pretty cool on the sprue.

What do you think?

Fires rage throughout the Frozen City as an inhuman army pours out of the cracks between realities. In the distant past, a cabal of city elders sought to save their lives by making a pact with a demon prince… and now the Red King has come to collect what he is owed, claiming Frostgrave as his own. Many have already fled before the Red King’s demonic hordes, while others seek to weather the storm, turning their bases into makeshift fortresses. The wizards of Frostgrave must choose – do they stand and fight, or do they abandon this great repository of mystical knowledge to the ravages of unearthly fire?

The Red King is the first supplement designed for Frostgrave: Second Edition. In this sprawling, epic campaign, wizards will be pushed to their limits, fighting not only against one another and the perils of the Frozen City, but also against an invading army. As the Red King’s power grows, the laws of magic and nature will start to bend. Can the wizards put aside their differences long enough to oppose this common foe, or will greed and mistrust doom them all?

Quote from Osprey Games Website Page for The Red King.

My Thoughts on The Quote

To me, that sounds like a continuation of the Forgotten Pacts Campaign Story. Of course, I would imagine that this supplement stands on its own too. I haven’t got my hands on this book yet, so my thoughts on it are just conjecture at this point.

A cooperative aspect to the title – intriguing. I wonder how the line “Can the wizards put aside their differences long enough to oppose this common foe, or will greed and mistrust doom them all?” will play into things.

I think it will be really interesting to see how the Frostgrave universe will continue to grow in second edition.

If you head to North Star Military Figures, you will find that you can get more miniatures than just these plastic ones for The Red King. Below is an image from the current bundle deal from North Star to get the new minis with the plastic demons.

Recently North Star shared a picture of some of those new metal minis painted. Here are the Red King’s Key Masters.

Overall, those are some neat minis. You have to hand it to North Star and Osprey. They do great work together.

Thank you for joining me in this preview article of the Frostgrave Demons Miniatures by North Star Military Figures and Osprey Games. These 28mm figures are looking pretty devilish and I really like how the Frostgrave world continues to grow.

If you haven’t checked it out, head over to North Star Military Figures to check out all of the new miniatures related to this release and their prices.

The Canadian Wargamer – A New Podcast