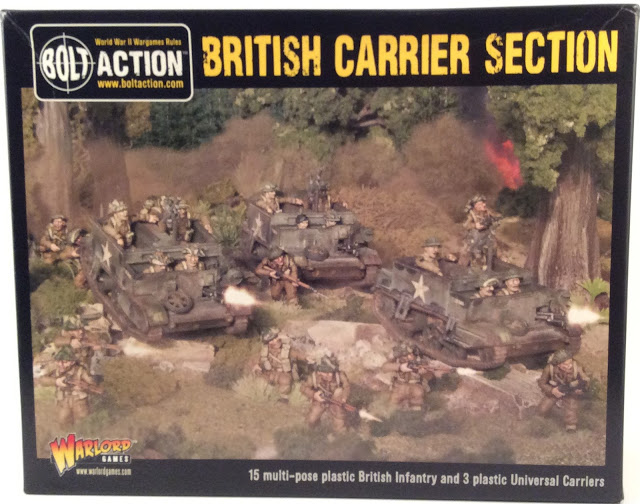 Today’s showcase and review is about my British Carrier Section Boxed Set for Bolt Action. I bought this kit from Forbes Hobbies in Cambridge, Ontario, Canada. If you live in the KW area, check that store out. They have plenty of Bolt Action Starter Army Box Sets and can order in whatever you need. They also have an active group that plays the game. I try to make it out myself once to twice a month. Now back to this kit. I really enjoyed building this set and found all of the plastic pieces easy to work with. The box itself comes with plastic sprues to make three Universal Carriers and 15 British Infantry. The sprues that come for the infantry are the same as what was in The British Infantry Plastic Boxed Set that I reviewed earlier. Unfortunately, I don’t have pictures of the carrier sprues to share.

The carriers went together well, but I found myself wishing that they came with an optional piece to equip a Boy’s Antitank Rifle. Instead, it comes with a Bren Gun and an option to add a second Bren. I put the extra Brens on all three of my carriers.

The rest of the figures in this review are actually not from the boxed set. I used the remaining figures to create a Sniper Team and several Orderlies. The figures below are from the British Engineers Blister and the figure pack, Major Ternadust.

This Boxed set is great value for the money and I really enjoy how the section plays out on the table. I personally can’t wait to get my Tank Wars Army painted up so I can take three of these carriers to carry around a forward observer, a PIAT Team and a couple squads of infantry. You can see this unit in action as a 600 point army in my earlier post “Battle Report – Bolt Action: Brits and Yankees versus Germans.”

How to Use Brush-On Primer for Miniatures

The Armies Of Oathmark – Covers the core rule book