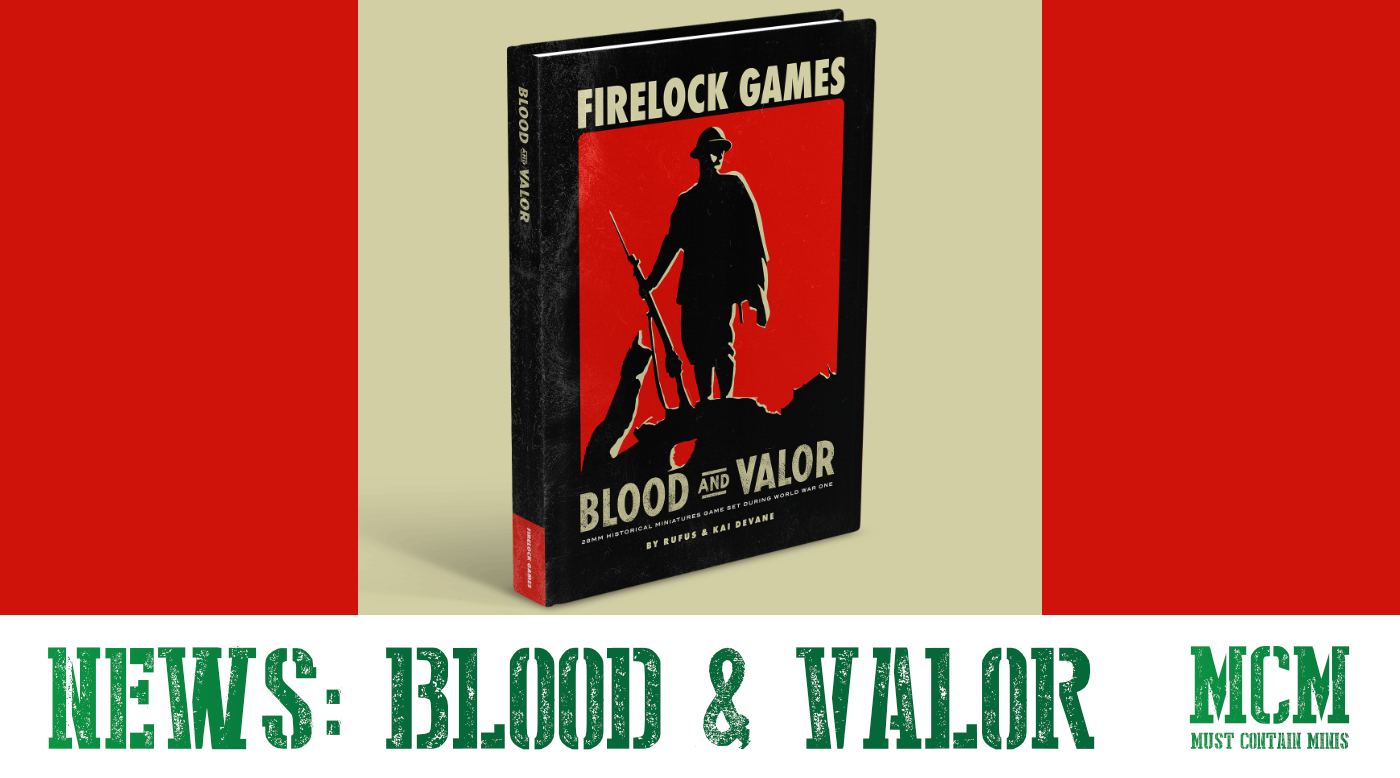 Welcome to my Blood & Valor News article about where Firelock Games plans to take the game in 2020. Haven’t heard of Blood & Valor? Let me paint you a picture.

What is Blood & Valor?

When I imagine World War One wargaming, I envision hundreds of soldiers in trench warfare. What if I said, “it doesn’t have to be that way?”

Let’s talk a bit about Blood & Valor. Blood & Valor is a low count miniatures game for WW1. You are looking at 25 to 45 miniatures per side in 28mm. Depending on points levels, they suggest a gaming area of 3′ by 3′ to 3′ by 4′. The fact that this game has such a low model count in my mind makes WW1 much more playable. No need to buy and paint hundreds and hundreds of WW1 miniatures!

The rules are based off of Blood & Plunder – which makes them somewhat familiar to me.

Uh-oh!!! A new reason to buy into a new period of miniatures! Like I needed one!

Right after listening to the news discussion, I rushed out and bought the book on the Wargame Vault. I was not disappointed. Due to having many projects on the go, I have not explored the game further than a quick read. That said, this is a news article, so let’s getting into what was discussed at that roundtable and what to expect for 2020.

As a note, this news comes from an online event that was a part of CyberWars 2020. CyberWars was an online convention by the HMGS. I embedded the recording of my source information at the end of this article. That way you can watch the video if you are interested in more details.

While the discussion took place back in July, they outlined their Blood & Valor News for the year at that event.

No Dice, No Glory hosted Rufus DeVane for the discussion about Blood & Valor. Rufus is one of the two lead designers and historical writers of the original Blood & Valor rule set. Currently, he is working on the second book for the gaming system. This expansion will be akin to No Peace Beyond the Line for Blood & Plunder. What that means, I can’t wait to find out. My guess is that it will be big and expand the game in many optional ways.

One of the biggest challenges that they faced with Blood & Valor is the timeline of the game’s release. The first book came out in December of 2019 / January of 2020. COVID hit as the game was building steam. They planned to run the first Blood & Valor tournament at AdeptiCon 2020. We all know what happened to that this year – cancelled due to COVID.

As such, Firelock Games pushed back their planned release schedule. In book one, they cover the core rules. In the second book, they head east and expand upon the game.

Book One – The Core Rules

Before getting into the second book, the guys talked about the original rule book. One of the questions that I liked was whether Rufus received any comments about the rule book that made him smile? Below is a summary of part of that answer.

It is always interesting to listen to game designers discuss the reception of their rules by the gaming community.

Now, let’s move along to what they said about the second book.

Rufus says that the second book will be more like No Peace Beyond the Line. It sounds like it is going to be a massive expansion with many new armies (and even periods) covered. The main drive is that they will take the game setting to the East.

The discussion was just over an-hour-and-twenty-minutes long. Below is a very brief summary of what is in the video. If you like what you read, be sure to also watch No Dice, No Glory’s YouTube video below too.

Rufus is Open to Ideas and Discussion

The second book for Blood & Valor is still in the development stages now. Rufus is very open to ideas right now. He hasn’t thought about a campaign system, but he says it is a cool idea to look into. Rufus likes campaign games himself.

Thank you for joining me in this Blood & Valor News article. There is a lot coming for this game and if you haven’t heard of Blood & Valor before, give it a look. It is really exciting to see a World War 1 tabletop game where you don’t need hundreds of miniatures.

Hopefully you found this information either entertaining or useful. Personally, I like to watch the news about many gaming systems because I am a collector of rules (and miniatures in general).

As I wrap up, I want to switch gears to give the guys at Firelock Games a plug. They are currently very busy with their Blood & Plunder: Raise the Black Kickstarter going on right now! That campaign is well worth a look if you like pirates or historical wargaming on the high seas. They already achieved their funding goal for a plastic two player starter set for the Blood & Plunder. This starter set comes with 26 miniatures and 2 ships in 28mm for historical gaming.

For more on Firelock Games, check out the section we have dedicated to them on Must Contain Minis.