Today, I am looking at the Sellsword mini-expansion for Frostgrave by Osprey Publishing. I purchased this document for $6 Canadian through Osprey Publishing. It is also available from Amazon for a slightly different price-tag. Regardless, this purchase will not break the bank.

The Cover of Sellsword.

When creating a Captain, the player may choose one stat to increase from its baseline and may choose two buffs (called Tricks of the Trade) for their character. These tricks may each be used once a game and give a slight increase to a single roll. The exception to this is Sprint (which gives 2″ extra movement for a turn) and Leadership (which allows up to three soldiers to group activate with the Captain).Sellsword has got to be one of my favourite mini-expansions for Frostgrave to date. What I like about it is that it adds a new soldier class for people who want a stronger soldier type – the Captain. This soldier comes with a lot of options for customization. If one wants a “shooty” Captain, that is just as possible as creating a melee master.

The player also gets to choose the Captain’s starting gear. Do you want to make the Sellsword fast and nimble or slow and well protected? These options can be fine-tuned by purchasing equipment for them. Like the Wizard, a Sellsword may carry more equipment than other characters. Other hirelings are allowed to bring only one magic item with them, while the Sellsword can bring up to five items. The catch is that if a Sellsword is given an item, he or she will never give it back to the Warband. That item is theirs forever! Because of this feature, I have not yet armed my Captain with magical items. 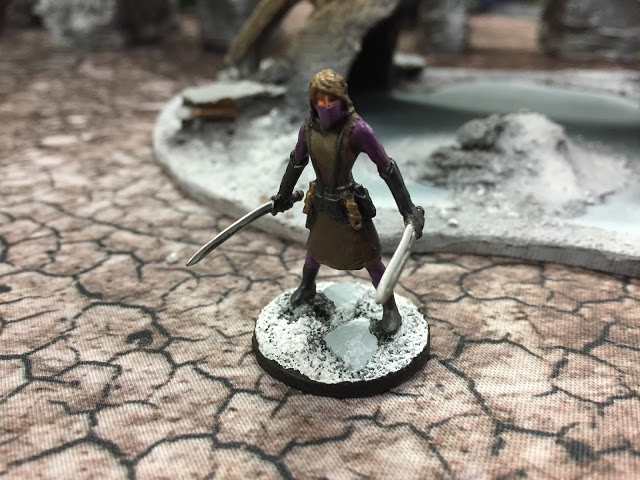 Meet Deserie. She is the Captain in my Cultist Warband. For her stat increase and buffs, she increased her speed and took Sprint (Moves +2″ for a turn) and Furious Attack (+3 to one attack roll). She is still a first level Captain and has killed one apprentice so far. She is armed with two swords, leather armour and a bow.

The Captain can group activate another soldier during the soldier phase. Despite being able to group activate with another soldier, the Sellsword needs to be well compensated. After every game, a portion of the total treasure gets divided out and given to the Captain. This reduces the total spending power that a Wizard has between games. Should the Captain become wounded, the captain rolls a survivor check just like the Wizard and Apprentice. The Sellsword can also level up to a maximum level of ten.

This is an image taken from North Star’s Facebook page showing off their new Cultist Captain models being offered in their Nickstarter (pre-order) Campaign. I really love this figure, but did invest enough to recieve it. The Nickstarter Campaign runs until Tuesday November 1 at 10am BST.

In Frostgrave: Sellsword, there are 3 missions that string along to make a short campaign. These missions all have elements that reduce the potency of magic in some shape or form, making the Captains more essential. The missions themselves look enjoyable and were interesting reads.

This expansion has 8 pages of content plus a re-designed Warband sheet that can be printed off to include the Captain into the group. I believe that this product is worth a buy just for the rules on the Captain.

The best way to get the Sellsword is through the Frostgrave: Folio book. It is also still available through various online services such as DriveThruRPG.