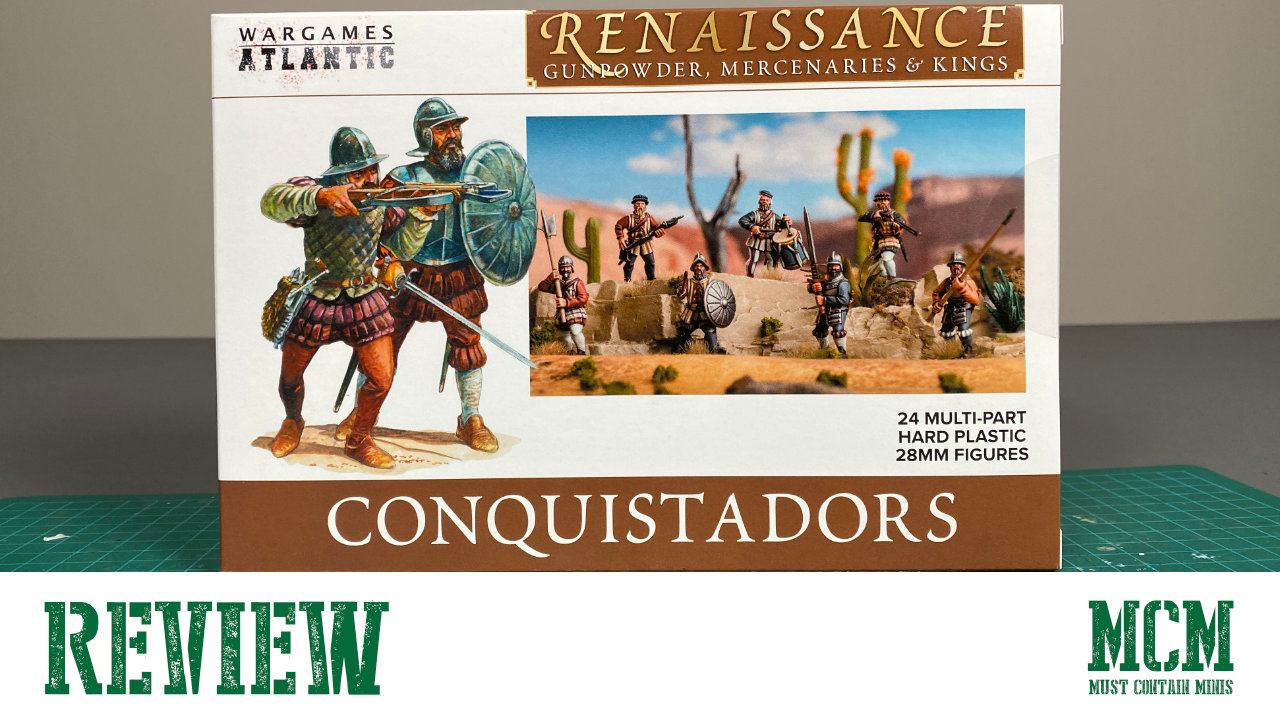 Looking for some miniatures for your Historical Wargames or to proxy in as Empire models for an old favourite game? Wargames Atlantic has a potential answer for you that comes in the form of some awesome renaissance miniatures. These figures specifically are their Conquistador miniatures.

These miniatures are currently sold alongside their Aztec Warriors, so if you want to play Spanish Conquistadors versus the Aztecs, you can, but when I saw these miniatures, I instantly thought “proxy Empire army” for a well known wargame that is currently not sold but teased that it will be released again.

Wargames Atlantic was kind enough to send me two boxes of these awesome renaissance miniatures and I built them up as a 48 miniature army for SAGA Age of Magic (AKA SAGA Fantasy). For anyone that plays SAGA, I was able to make a 6 point army with the contents of this box and have a few extra figures for drummers and bannermen.

Now, let’s take a closer look at this box set.

The Box and Contents of Wargames Atlantic’s Conquistadors

As you would expect from Wargames Atlantic, the front of the box has some nice artwork on it and pictures of painted minis, while the back of the box shows more painted minis and describes what is in there. If you are wondering what is on the sprues, we will get into that.

Now, let’s get right into those sprues. You get four of each of these.

This box is surprisingly big. Take a look at it compared to a Primaris Space Marine.

These miniatures are so easy to assemble.

I built these Conquistador Miniatures by Wargames Atlantic with the game SAGA Fantasy (Known as SAGA Age of Magic) in mind. I used the armor level to signify the three levels of soldiers. Light for levies. Medium for Warriors and heavy for my elite troops.

Now, let’s take a look at how the miniatures look.

The miniatures above together represent a 6 point SAGA Age of Magic army perfectly. You could probably squeeze out 7 points if you called some of the bannermen below “lieutenants.”

Looking at the weapons on all of these minis, I think it would be totally acceptable to buy a few boxes of these figures and use them as proxy empire miniatures for Warhammer Fantasy or the 9th Age: Fantasy Battles. Of course, there are many other games these would work in too.

Remember how I mentioned that I had some spare figures left. Here they are.

Below are the 48 miniatures that I built with two box sets.

Again, for any of you who play SAGA, this is 6 points worth of figures comprising of…

With some extra figures in the top left corner.

That works very well for me. Next step would be to actually get in a game. Fingers crossed for someday. I have got in just two games since the start of the pandemic. Carrying on, let’s take a look at how the figures scale up versus other brands.

Below is a scale comparison image.

A Video Review of these Awesome Renaissance Miniatures

If you prefer videos, check out the video version of this post. If the video below does not work, you can find it at this link here.

Overall, I really enjoyed these Conquistador miniatures by Wargames Atlantic. They have nice armaments and I could foresee someone using them as proxy Empire models or as figures for legitimate historical games too. My plan is to use them for SAGA: Age of Magic.

I wanted to build them as soon as I saw that they were published and I am very happy that I was sent a couple of boxes for review. Thank you Wargames Atlantic for sending those. Also, I am not sure if you have seen this, but Wargames Atlantic teamed up with MyMiniFactory recently to bring even more offerings to the market. If you or a friend have a 3D printer, this may be worth checking out.

Hopefully you enjoyed this review and it helps you figure out if these are miniatures that you would like to add to your collection.

Memoir 44 – The Perfect Game for the Holidays