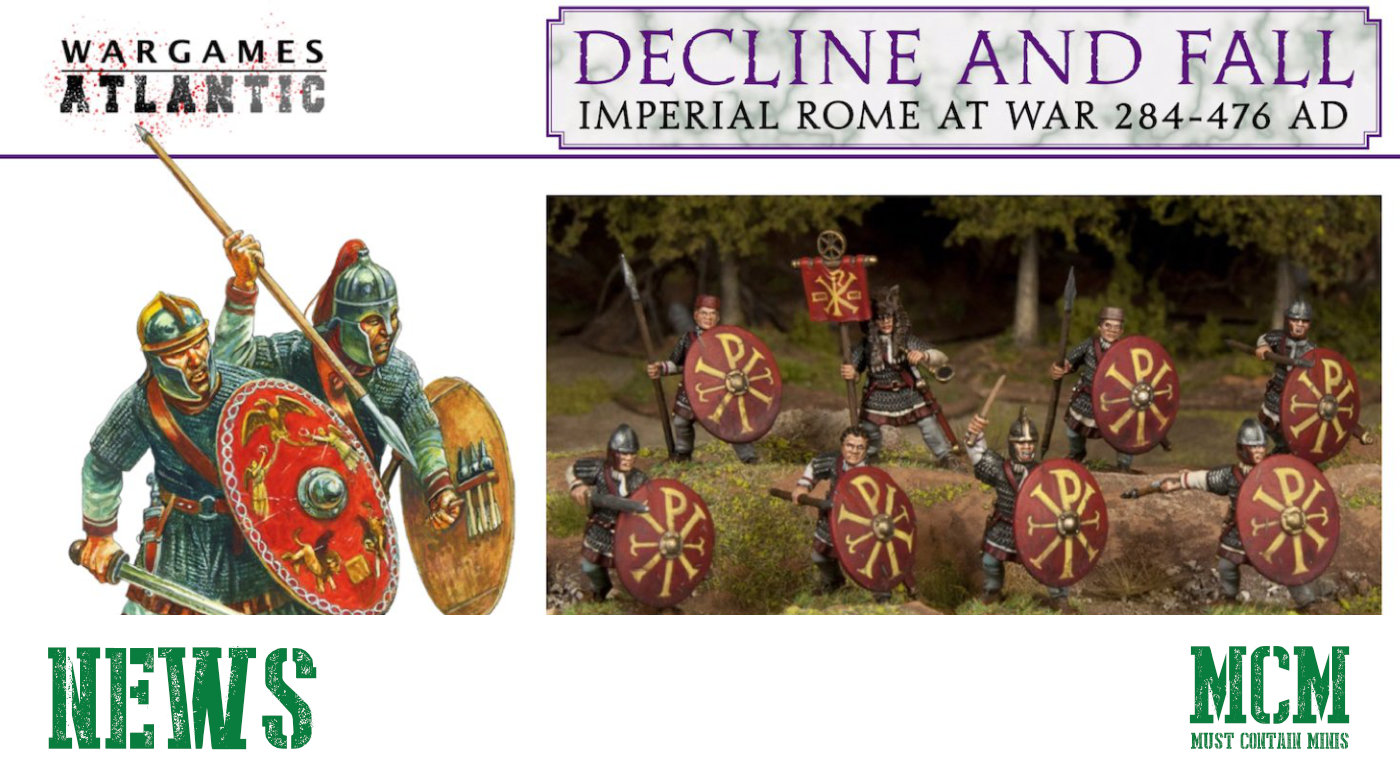 Wargames Atlantic just announced that they are getting into yet another line of figures with new 28mm Roman miniatures. These figures spearhead their coverage into the fall of Rome. This new line is called “Decline and Fall.”

I have to say that following Wargames Atlantic is tons of fun. I can’t believe how fast this company continues to release new plastic kits. These new miniature sets pack in tons of value at extremely fair prices.

Let’s take a look at Wargames Atlantic has to say about their new miniatures.

News of the New Roman Miniatures Straight from Wargames Atlantic

Below is a quote from Wargames Atlantic’s Website about their new range of miniatures.

This range will roughly cover the period from the crisis of the 3rd century through to the fall of the Western Empire and beyond. Some sets from our Blood Oaths range may be useful here as well. We will start with Romans in lorica hamata (mail) and will soon add Goths, Franks, and Army Builder sets for both the Romans and the Goths.

The Army Builder sets will have 60 figures each at the same price as our other sets ($34.95/£25) and are designed to be used in combination with the main Roman and Goth boxes to provide all the command you need to build many full units using a combination of the boxes.

This first box will let you build later Roman legionaries with command and lots of head and weapon options to cover a wide swath of history. These also make excellent superior warriors for your Goth, Hun, and other Germanic tribes.

This Quote is from Wargames Atlantic’s Blog.

Wargames Atlantic plans to put out at least five kits for this new range this year.

Wargames Atlantic already posted some more preview pictures of these minis and they are available for pre-order off of their website. Let’s quickly look at the box and the sprues through pictures that the company has released on their website.

I see 16 head options per four miniatures here on the sprue. That should allow you to build these minis for a few different forces. In fact, Wargames Atlantic did just that in one of their preview pictures.

More Images of the Roman Miniatures

Over all, the miniatures look pretty good and come at great prices. Below I share with you a few more pictures of the minis from their site.

Wargames Atlantic is a great company. They bring us quality miniatures at very affordable prices. If you are interested in this set, be sure to check their product page. I sourced all of the images in this post from that page.

The company also recently started a Release Schedule page to help us keep notes on what is on route from them.

While you are at it, be sure to look around Wargames Atlantic’s website. No matter what you are into, there is a good chance you will find something you like.

I also have an entire section of this site looking at their products.

Thank you for joining me in this preview look at Wargames Atlantic’s Roman Miniatures. These miniatures are a part of their new Decline and Fall line of miniatures. I am really looking forward to seeing what else comes out from them.

Must Contain Minis on The Canadian Wargamer Podcast