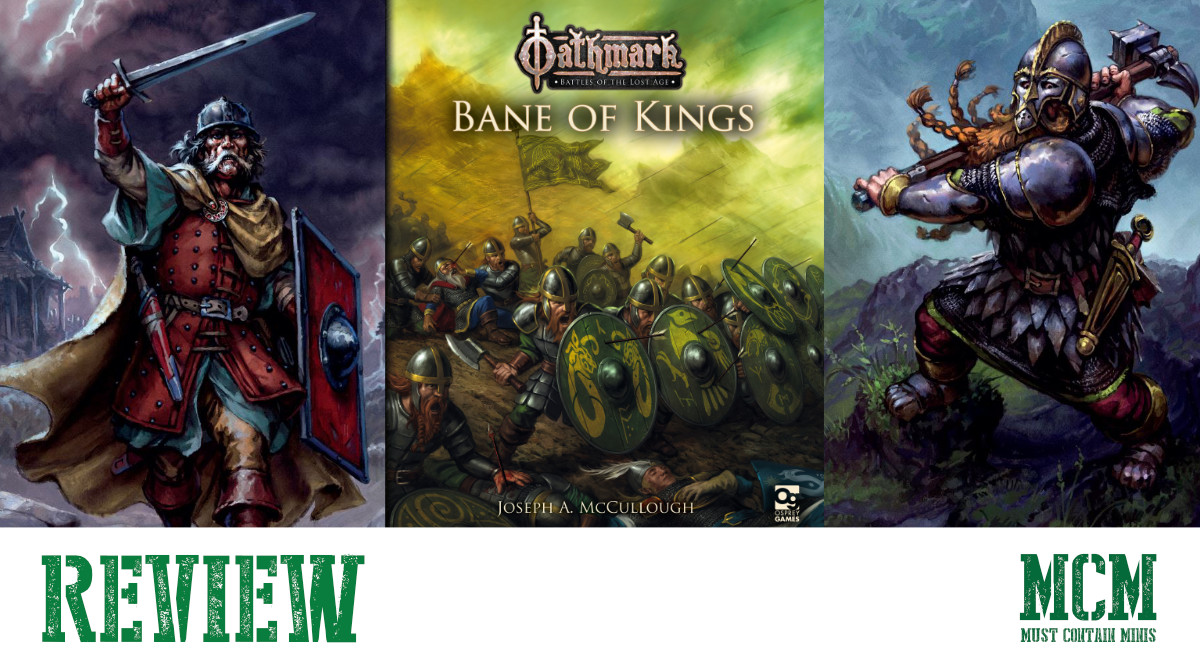 Have you ever wondered what is in Oathmark: Bane of Kings?

Oathmark: Bane of Kings is a brand new expansion to a popular mass fantasy battles miniatures game published by Osprey Games. That game is called Oathmark. This book written by Joseph A. McCullough brings a number of new elements into the game. These elements include unit formations, new units (chariots and animated stone units), and Kingdom events. This expansion primarily Focuses on Kingdom events which help build the story of your Kingdom as you play through your campaigns. There is even a system to track the time that passes in game years as you play the game. To top it off, Osprey Games brings us two new campaigns in the form of three scenario military expeditions. In this post, I am going to share with you what you can expect in this book and even share some sample pages too.

Special thanks goes out to Osprey Games for sending me an electronic copy of this book for review purposes. In the interest of full disclosure, I have not played a game with the expansion rules, but I have read through the book and want to share with you what is in there.

Osprey Games describes Oathmark: Bane of Kings as follows in a Press Release that they sent to me.

Time is the bane of all kings. Always does it march forward, bringing change and challenges, wars and disasters, invaders and internal rebellion. This supplement for Oathmark: Battles of the Lost Age, focuses on the passage of time and its effect on a players kingdom. While wars and battle still determine their ultimate fate, many other events can affect the armies of a kingdom. Plagues and blights can reduce access to soldiers from specific territories. Attempted coups can cost a king some of his best generals. On the other hand, unexpected alliances might give a kingdom access to unusual troops, or the birth of a new heir might bring wondrous presents.

Along with the rules for the passing of years, this book also presents the option to train your units to fight in special formations, such as phalanxes, shield walls, and skirmish lines. These will allow players to use their existing armies to try out new strategies and tactics to swing their battle in their favour. This book also includes several new military expeditions, including numerous scenarios, to once again challenge a player’s generalship.

Description from a Press Release email sent to Must Contain Minis from Osprey Games.

When I get a book, I like to look at the new units that you can take in your armies. Often, that is what gets my imagination really going and if I like what I see, it often improves my perception of the book.

Bane of Kings does not bring in as many new units as the previous expansion Oathbreakers did.

For those that don’t know, Oathmark: Oathbreakers allows you to bring an entire undead army into your game. Bane of Kings instead adds Chariots and Animate Stone units. It also adds in formations, and there will be more on that later. Now, the new units…

The stone units include Living Statues, which can be up to 10 feet tall. You can also now take Colossus sized stone constructs. If that isn’t enough, your army can now include Animate Idols. These Idols can be set up to carry Oathmarks on them. That helps give a bonus to your army.

All three of these units are Spellcaster Controlled, so if you take them, keep your Wizards safe. If your army loses all of its spellcasters, then you also lose these new stone based units.

Chariots are what you would expect. They are essentially little tanks good for charging units on the tabletop. You can add a bowman to them to get one shot off each time that your chariot moves.

The chariots come with different statistics for each race. Elves have the best stats (at the cost of the most points), while Goblins have the worst stats (but at the cheapest cost in points).

The rules for Undead chariots are not in this book. Instead, you can find them in Oathbreakers along with the rest of the units of undead armies.

That pretty much wraps up the new units in Bane of Kings. Instead of adding more units, Joseph takes a unique approach. To change things up, he adds in new ways that you can use the miniatures that you already own. He does that through the inclusion of Formations.

Formations are small upgrades that you can add to your units to change the way that they fight. These upgrades have a points cost per model that you must pay to take them. They also have a required piece of terrain that your Kingdom needs to own in order to buy the upgrade.

The sample page below shows you the terrain piece that you need and the formation you can take with that corresponding land. Here you will see the six types of formations available to your forces through Bane of Kings.

To enter the formation, you pay an activation point. To exit it, you do the same. While in formation, you receive a benefit (and sometimes a penalty too).

The Shield Wall helps protect your forces from frontal attacks and eliminates the opponents ability to do a Wild Charge against your unit.

A Chariot Unit allows your forces to take Chariots in units of two instead of units of one.

Javelin Storm gives your force a stronger initial charge. This happens the first time they charge an enemy and after that, the bonus no longer remains.

The Phalanx makes your units better at fighting enemies straight on but worse at defending your flank and rear. This is an ability that you cannot turn off and on during the game.

The Square formation makes it so all of your unit facings are considered “Front.” While in square formation, you lose the target number bonus for extra ranks while attacking.

Finally, we have the Skirmish formation. This allows your small unit (of five or fewer ranged figures) to maneuver better. The unit also gains some shielding protection, but loses some of its normal Fire Over or Aimed Fire traits as a tradeoff. This is an ability that can be activated and deactivated.

Kingdom Events are the real core of what this expansion to Oathmark is about. In fact, 47 of the 80 pages in this book are dedicated to Kingdom Events.

What are Kingdom Events?

Below is a sample page to let Osprey explain it to you better. Below you will find first page of the Kingdom events section.

I am going to show you a few pages from those sections to give you an idea of what the events do.

Show the Events in Oathmark: Bane of Kings

Likewise, let’s take a look at another list of possible events that could affect your Kingdom.

Because the Kingdom Events play such a big role in this expansion, I am going to share with you one more page sample before heading on to the next section of this review.

What Else is in Oathmark: Bane of Kings?

Oathmark: Bane of Kings also features two military campaigns (each consisting of three scenarios) as well as an Appendix. The Appendix contains a couple of new territories, 5 new General spells and a description of the new special abilities for the new units in the game.

Some of those new abilities I recognize from Oathbreakers, but if you don’t have Oathbreakers, you will be happy that they are in this book.

Of course, this book also contains awesome art work. All three images in the title bar at the top of this page are from this book. On top of that, here is another sample of the artwork in the book.

Is Oathmark: Bane of Kings Right for You?

Now that you have an idea of the contents of this new expansion for Oathmark, you should have a better idea on whether it is something that interests you.

Who would it interest the most?

It is my opinion that this expansion to Oathmark would be best for those wanting to create extra narrative to their games based on events that happen to their Kingdoms. These events can either help or hinder your armies in the battles to come. Each game you get to roll a new event, so it should generate an interesting narrative as you play through your Oathmark Campaign.

If you are interested in just one off games, I am not sure if this is the right book for you. That said, it does offer you the addition of formations and a few new units too. On top of that, there would be nothing wrong with you rolling an event before your one-off game just to play it out and see how you do with the random boon or bane.

Below are some links to help you should you want more information about Oathmark, or to find the product at some select online stores.

In the interest of full disclosure, I have an Affiliate relationship with some of the companies below. If you make a purchase from a link that shows the word “Affliate,” then I make a small commission off of the purchase at no extra cost to you.

Now, let’s get to those links.

Thank you for joining me in my review of Oathmark: Bane of Kings. Personally, I enjoyed reading the book and like the idea of Kingdom Events during campaign games.

The book is well done and visually appealing.

Special thanks goes out again to Osprey Games for sending me an electronic copy of this book for review.

What is the Most Beautiful Tabletop Miniatures Game?