We at Must Contain Minis have been watching Firelock Game’s Blood and Plunder Kickstarter (No Peace Beyond the Line) with a great deal of interest. In fact, I just made my Captain level pledge and look forward to owning the new goodies next year when the rewards are mailed out.

Recently, Mike Tunez (the creator of Blood & Plunder) was kind enough to grant an interview with Must Contain Minis. Below are the questions and answers from that interview.

I love that Blood & Plunder is a historical based game, but can you tell us why you decided to go the route of History rather than Fantasy?

The primary reason is that the reality is truly stranger than fiction in this case and we found the history of it fascinating! I’m personally amazed it doesn’t get more attention.

The Blood and Plunder Rulebook had a number of pages dedicated to outlining the history of the game’s setting. Can we expect the same from “No Peace Beyond the Line?” If so, how will it expand on what is already in the core book?

Definitely! Expect a lot more historical figures and factions to make an appearance and their stories along with them. It will also feature an expanded timeline.

The Kickstarter Rewards so far are all very exciting in the “No Peace Beyond the Line” campaign. My favourites so far are the Canoa and Civilians. Can you give us any teases of what else we might be able to expect as the campaign goes forward?

I don’t want to give away too much, but I will say there are some new dice I’m excited about!

It will hold at least 8. It’s still a work in progress though so that number can change.

Any chance to get some sneak peaks on the stats of the new ships or units?

Everything is still being tested so it’s all subject to change but I’ll share one from each category: Enter Ploeg (Dutch Boarding Party) – 6 Points, Veterans. Armed with Braces of Pistols, Standard Melee Weapons and 1 out of 4 may have a Blunderbuss sidearm and Explosives. Fight 5/6, Shoot 7/6, Resolve 4. Special rules include Expert Sailors, Expert Artillery Crew and Battle Hardened. Piragua – 7 points, Top Speed 5”, Windward -3”, Turn 5”, Draft -, Size 1. Fortitude 3, Integrity 4. Sail Settings 5/2/0/A. Can carry 4 swivels. Traits include Sweeps: 4 and Low Profile.

Some of the Veteran players that I talked to are worried that this game might see some power creep in the new book versus the last book. Is this an issue that people should worry about? How do the Dutch and Natives balance versus the existing Nations?

Power creep is something I’ve seen do a lot of damage to games that I have been fond of. So it’s definitely on my mind as I go about designing units. We still have months of testing ahead of us but we are getting a very significant number of play test games in to look for this very thing. So far our points formula is holding up nicely. I am confident that power creep will not be an issue with the new units and factions we are developing for this expansion.

What sort of Additions can players expect to see for Land Battles in this book?

New events that are geared specifically for land battles and specific location types. Cavalry, European regulars and field guns will definitely give land forces more flavor and options. Larger battle rules will add a new dimension to both land and sea battles as well.

Can you give any teasers about the Campaign system and what to expect there?

Not a lot I can share on this right now, but I will say that any type of force, with or without a ship, can participate. There may end up being two different campaign types in the book as well…

I noticed in the core book that there are rules for pikes, but no units have pikes yet. Might you be releasing some pike units in the future?

Militia pikemen for all European nationalities will be present in the book. They will mostly be support units as they were rare, if present on the field at all, in most militias. They will be armed with lances by default as those where more common but will have the option to exchange those for true pikes.

Are there any painting guides out there for Blood and Plunder or suggestions on how to choose historically correct colours for the units?

This is something we have been trying to get off the ground and will hopefully see the light of day soon! For now I can say that the painted minis we feature are your best guide.

In particular, I notice that the French Flibustiers on Firelock Games’ Website (and in the rulebook) are mostly clothed in blue and red uniforms. Would it be incorrect to paint them with a different colour scheme? Are there any suggested alternative colour schemes that would also be historically accurate?

Uniforms is definitely the wrong term for these guys! Those would have been popular choice, but you can’t really go too wrong painting any model in our range whatever color you want. You may want to avoid rare colors for the period such as pink, purple or orange though.

Can players that missed the First Campaign pick up existing Blood and Plunder products at a discount over retail prices through this Kickstarter?

Yes they can! Those items will ship along with the regular rewards.

I would like to thank you again for your time. We are really enjoying your Kickstarter and can’t wait to see what else is in store for this beautiful game.

Above are some fairly interesting tidbits about No Peace Beyond the Line. I especially like that Mike gave out some potential statistics for the game. I was wondering how the Piragua, Canoa and Dutch all lined up into the game.

Having conducted this interview, I think I might be switching the nationality of the figures in my pledge and going forward with picking up a Piragua and Canoa. Hopefully the guys at Firelock Games don’t mind me saying, but when I make purchases, I like to ask myself what other games can I also use those figures with. I already have plans of using the Piragua and Canoas for Frostgrave: Ghost Archipelago and Flint and Feather.

Of course, all of these items will also be used to play Blood & Plunder when I receive my pledge. I think it is going to be a lot of fun running a couple of Canoas and a Piragua against a Sloop to see which side would win. I am also looking forward to seeing the expanded land rules and new units in the game. 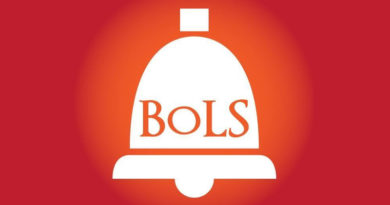 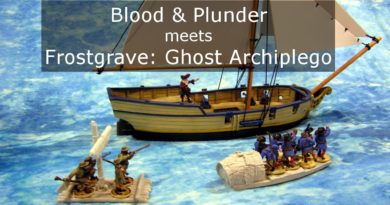 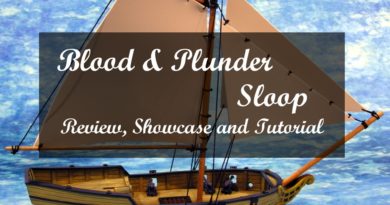