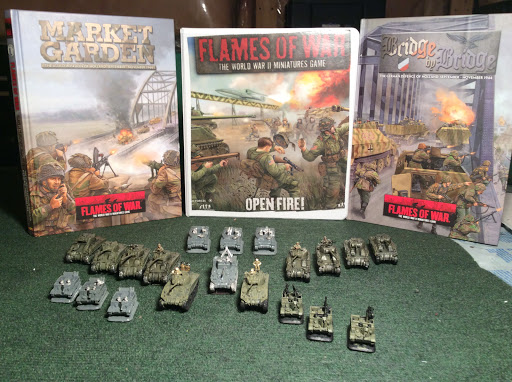 Phoenix Games in Kitchener, Ontario, Canada is hosting a Flames of War tournament this Sunday (May 29, 2016). It will be my first tournament since August, when I won first place at The Game Chamber in London with a list from Desperate Measures. This upcoming tournament at Phoenix is themed in that they want you to pick lists from either Bridge by Bridge or Market Garden. There is no penalty for straying to other lists, but I will keep mine fitting the theme.

Like some others that may read this blog, I play multiple games and rule sets. Back in August, I played Flames of War almost exclusively. Now I play Bolt Action (mostly) and have been reading a whole host of Osprey Wargames books.  I have even played some DBA historical games. I hope that I keep the Flames of War rules straight for his tournament. Below is the army that I intended on taking to this tournament.

As you can see from the pictures, I have not finished painting this army. Since the tournament is in a few days, I will not take this army. Instead, I will bring my Germans. For now, I will outline how I won my last game with the list above and share the list that I took to my last tournament.

During my last game, I played against a well seasoned veteran who was playing an American Infantry List. He had multiple artillery platoons (I believe 8 heavy guns total) and plenty of infantry. He had a ton of antitank assets so it looked like it was going to be a tough battle for my forces. Despite a well matched opponent, I believe that it was in deployment that I won the game.

My opponent placed almost all of his serious antitank assets on the left side of the board to counter the Shermans that I placed on that side. I then placed my Carreers in the centre (or slightly right of it) and my RAMs loaded up with infantry on the far right. My tanks pushed forward and kept the entire left side busy while my RAMs and Carriers veered to the right and went straight up the right flank. Because the antitank assets were placed to deal with my Shermans, my Carriers and Kangaroos had little fear of retaliation. That being said, my opponent started to mark my carrier platoons with time on target and there was a small pass where my vehicles got bottlenecked. For a while, it looked like my guys might not make it up the field. Through perseverance, my guys pushed up and claimed the objective.

At my last tournament, I took the following list…
Confident Trained Panzer Kampfgruppe from Desperate Measures (Forces Of War)

The Tank Riders didn’t help much in the tournament, but they did look pretty and soaked up some points.

The 4 tank platoon of Jadgpanthers had a surprising amount of success. I know that many folks on the internet believe that Jadgpanthers are useless and over-costed, but in a meta dominated by heavy tanks, putting out 4 well-armoured antitank 16 shots a round is a great equalizer. There were a few tense moments where I knew that if they did not make their shots, that I would be toast the next round, but the dice Gods were good to me and I managed to win the tournament.

Part 2 will focus on the list that I take to Sunday’s tournament, how I perform and if I leave the tournament with any take-away lessons.

If you buy from Amazon from here, a portion of the sales goes to help supporting Must Contain Minis.

Amazon Back to School Sale